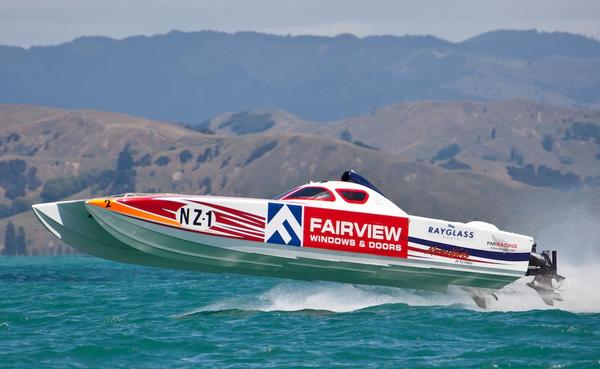 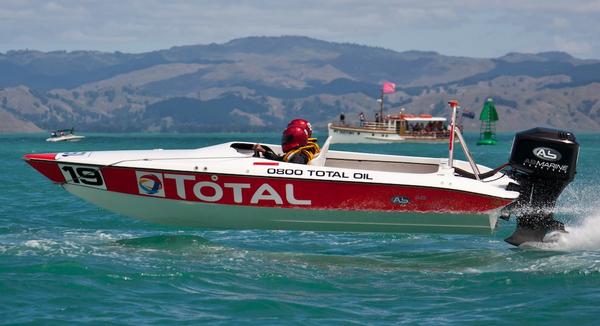 Total Oil will be determined to win this week. CREDIT: Cathy Vercoe

NZ Offshore Powerboats to create "Thunder on the Coast"

Race Three of the New Zealand Offshore Powerboats 20012 series takes place on Saturday 18th February off the coast of Beachlands in the Tamaki Strait on South Auckland's East Coast. This year's race is expected to be fast with very little swell and light winds.

After two races in the 2012 series, some teams are starting to look like they have a strong chance of dominating the racing in their class. In the Superboats, 'Fairview' driven by Warren Lewis and Andrew 'Flea' Koolen leads with two straight wins, and the team will be looking to get their hat trick with a win at Beachlands. They may well have a lot of competition on their hands with the turnout of three other Superboats; 'Fujitsu Better Heat' driven by Tony Coleman and Chris Hanley, 'Schick Hydro' with Scott Lewis and Murray Tuffin in the cockpit, and 'Profloors' driven by Wayne Valder and Richard Shores. All of these teams are experienced and know how to win so this is a race that will come down to acceleration on the straights, tight cornering, and driving the best line between the marks.

Mike Gerbic and Allan Branch had a great race in 'Espresso Engineers' at Gisborne and are improving with each race in the Superboat Lite Class. While the leading boat 'Red Steel' driven by Tony Carson now has two clear wins and looks like the favourite for the season, there is still no doubt that they will be watching carefully to see how the new 'Espresso Engineers' team develop. Tony is joined this week by Wayne Carson. 'Alimax' driven by Gordon Robinson and Andrew Macbeth had problems at Gisborne but are another team with plenty of potential. The 'Speedy 1' team is an unknown quantity. While the boat has some history the drivers Pete Jonas and Steve Bone are new to the series this season and while not participating in every race may yet prove to be a threat. A DNF at this stage could make a huge difference to any team, but the leading team in particular have a lot to lose, and the middle of the series is always fraught with the need for speed, tempered with the need to get round safely and get the much needed championship points.

The Sports 60 Restricted class provided a ton of entertainment at Gisborne with the lead changing multiple times within the 60 mile race. This class is proving to be extremely competitive, and there are no clear leaders at this stage. How many boats will front this week is still unclear with 'CRD Automotive' sustaining some pretty major damage in Gisborne that may keep the team out of competition for a few races. James Taylor will be adamant about getting a win this week in 'Total Oil' after leading for so much of the first race, finishing second, and getting a fourth at Gisborne. 'Konica Minolta' and 'Thin Ice' are tied for first place at present, but anyone watching this class will know that there is very little indeed between the teams and it will not take much for the positions on the leaderboard to change.

The Auckland races always bring out more of the locals so we hope to see some entries from some of the classic boats as well as a turnout in the other classes. 'Back2Bay6' the Batboat competing in the Super 60 class will hopefully have some competition this week from Mark Diggelmann and Dave Vazey in the black Batboat 'Espresso Engineers' that was driven to victory by Mike Gerbic and Dave Vazey last season. We also look forward to seeing Bob Smith and his son Alexander out again in their boat 'Triple Trouble' which performed so well at Taupo, and will be competing in the Sports 60 Class.

Racing starts at 1.00pm on Saturday, and the event usually takes an hour to be completed. Two races are run at the same time with the Superboats and Superboat Lites completing a 100 mile race and the other classes completing a 60 mile race.

Boats will be on display on the reserve in front of the Beachlands Yacht club on Saturday morning.
Superboats and Superboat Lites will launch in the Pine Harbour Marina, while the smaller boats will use the public boat ramp.

Best viewing from the foreshore by the Beachlands Boat Club off Wakelin Rd.

After the Beachlands event racing continues at Napier on the 17th March, Whitianga on the 31st March, Wellington on the 14th April, Auckland on the 28th April and the final race of the season at Tauranga on the 12th May.