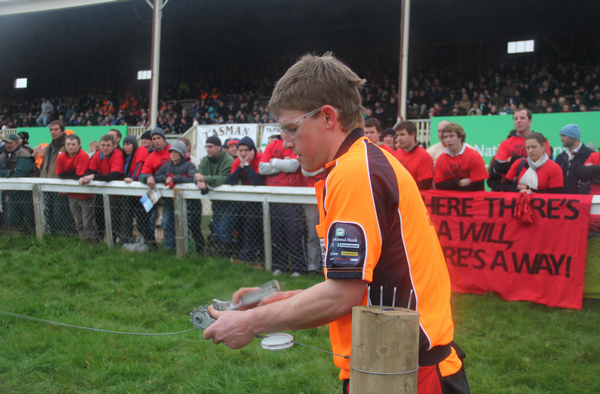 The Aorangi Regional Final for The National Bank Young Farmer Contest is to be held alongside The North Otago A&P Show this Saturday (25th February).

Eight of the best Young Farmers from right across the Aorangi Region will be competing in four different Challenges during the Practical Day at the North Otago A&P Showgrounds before they head to the Evening Show to answer the big questions at the Oamaru Opera House.

Six of the Regional Finalists have studied at Lincoln University and several of them hold leadership positions in their New Zealand Young Farmers Clubs, Districts or Regions.

Twenty four year old Phil Wilson is a Lincoln University graduate – he holds a Bachelor of Commerce (Agriculture) and is a Lower Order Sharemilker on a 400 cow dairy unit on the Waitaki Plains. He’s the Vice Chair for the Aorangi Region and this is his second time at Regional Final level. Phil is married to Becky and they hope to work their way up to farm ownership.

Andrew Scott is the Chair of the Mackenzie Club and competed in the Grand Final in Gore in 2010. The 30 year old is engaged to Helen and is a Sheep and Beef farmer in South Canterbury. Andrew has a Diploma in Farm Management from Lincoln University and is a member of the Rural Fire Service. Andrew is also a graduate of Lincoln University.

Twenty eight year old Campbell Tait is married to Martine. Campbell has previously worked in the sheep and beef industry and is now a Dairy Farmer on a 700 cow dairy unit in Mid Canterbury. He’s a member of the Hinds Club and is the Mid Canterbury District Chair.

James McLeod owns his own cultivating and drilling business and is also involved in the running of the family farm. The 25 year old has a partner Shantelle and is a member of the Milford/Clandeboye Club. He has also studied at Lincoln University and holds a Diploma of Agriculture.

Lincoln University graduate Jared Clarke holds a Bachelor of Agricultural Science (Hons) and is currently Second in Charge on an 850 cow Dairy Unit. The 24 year old is engaged to Victoria and this will be his first Regional Final. Jared is a member of the Five Forks Club in North Otago.

Fellow Foothills Club member Andrew Wiffen is Second in Charge on the Wiffen family farm; a sheep and beef breeding and finishing operation. He has a Bachelor of Commerce (Farm Management & Rural Valuation) from Lincoln University. Andrew is a member of the Rural Fire Service and helped out with the Farmy Army.

Tom Kearney is the Treasurer of the Foothills Club in Mid Canterbury; he’s married to Jamie and they have a one year old daughter. Born and bred in Christchurch, Tom left school for a shepherding job and now leases an 850 acre block trading in 25 – 35,000 lambs a year. It will be the first time at a Regional Final for the 27 year old.

Twenty two year old Reg Millar is competing in his second Regional Final. The Milford/Clandeboye member is the Sole Charge Manager of a 50ha dairy unit milking 180 cows. He plans to get a sharemilking job for the next season and is aiming for farm ownership by the time he’s 30.

The pressure will be on: not only will the Contestants be filmed for TVNZ’s Road to the Young Farmer Contest (starting April 7th) they will also be competing for the chance to represent their Region at the Grand Final in Dunedin in May. A very generous prize pack valued at over $10,000 is also up for grabs.

The pack includes a Honda XR125 two-wheeled farm bike valued at $4000, a $1500 Lincoln University Scholarship, $1000 cash and $500 towards a capability development programme from AGMARDT, $1000 worth of Ravensdown quality fertiliser products, $1000 from The National Bank, clothing valued at $750 from Swanndri and Silver Fern Farms will provide a package of quality produce valued at $500.

Before they can start thinking about prizes and Grand Final, the Contestants will need to complete the AGMARDT Agri-business Challenge, Ravensdown Agri-skills Challenge, Lincoln University Agri-growth Challenge and the Silver Fern Farms Agri-sport Challenge at the North Otago A&P Showgrounds from 8am.

From there Contestants will have the remainder of the afternoon to prepare a speech and head to the Oamaru Opera House for the Evening Show at 7.00pm (tickets are $25 and are available from The National Bank, CRT and the Opera House in Oamaru). Here they will face question buzzer rounds as they try to gain the last few points that could see them heading off to Grand Final.

The AgriKidsNZ and TeenAg Competitions will also be taking place at the North Otago A&P Showgrounds. The top three teams from each Competition will also be invited to Grand Final in Dunedin on May 25th.