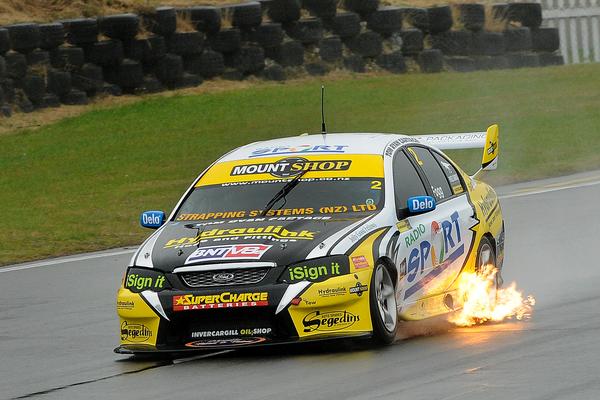 Birkenhead’s Angus Fogg has taken the 2011/2012 BNT V8s championship title with a race to spare after scoring enough points in today’s second of three races at the series final round being held near Taupo.

Nine years since debuting to the Ford versus Holden V8s championship, the 44-year-old race car engineer and driver of the #2 Radio Sport Ford Falcon, clinched the title after finishing the 12-lap race placed fifth. Climbing to second in the opening laps an incident with title rival and V8Supercar driver Jason Bargwanna dropped the series leader down the order, but he was still able to collect enough points for the title outright.

Contested over six rounds starting at Pukekohe near Auckland in early November 2011, Fogg’s consistent performance meant he outperformed his rivals on the chase for championship points. With an insurmountable lead to the current second placed driver, Fogg says it was an enormous relief to have finally achieved the win with a race up his sleeve.

“It’s been a long time coming and finally we’ve got the #1 for the side of the car. There are a lot of people to thank – too many and they have been unbelievably good to me – on and off the track. It’s just a great way to finish a season and we got to have some Chopper Reed moments in that last race with Jason Bargwanna,” said Fogg.

“We’ve had a fantastic battle all year and it’s been really tight – now I can move on to the next stage in my life.”

Fogg and his team have one race left to complete before a technical inspection will confirm the championship position. The team will then prepare the car for the Hamilton V8Supercar weekend where they will contest the Jason Richards memorial trophy race – a close friend and former team mate of Fogg’s.