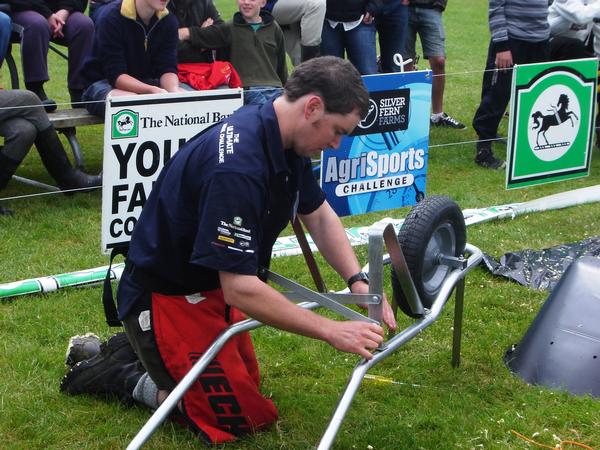 Brad Lewis is the latest Contestant to make it through to the Grand Final after winning the Taranaki/Manawatu Regional Final of The National Bank Young Farmer Contest in Hawera last night (March 12th).

Twenty six year old Brad won during the Evening Show, held at The Hub, by a three point margin over runner-up Nigel Will in yet another close finish for the Contest.

Brad wasn’t very confident going into the last round with Nigel racking up an impressive 46 points in the question buzzer rounds.

“Going into the last couple of rounds it was neck and neck and I thought he’d just keep going; but I must have just managed to squeeze through.”

It was Brad’s first time competing at a Regional Final and admits he wasn’t expecting to be leaving with the win.

“I didn’t really know what to expect and hadn’t done a heck of a lot of preparation. Some things went my way and I must have had a bit of luck.”

The unexpected win has thrown out some travel plans for Brad and his partner Laura who were supposed to be heading to France in Mid-May – a trip that will be put on hold so Brad can attend the Grand Final in Dunedin in May.

“Laura’s wanted to go overseas for a while, and I’ve been putting it off, but finally decided to go this year – we’ll have to put it back a couple of weeks now though.”

The holiday will serve as a well-deserved break for Laura and Brad; he’ll be putting in a lot of extra study before Grand Final as he knows he’s up against an experienced field.

“They’ve [the other Contestants] all done well before too. I’ll be putting in a fair bit of work so I don’t get embarrassed at Grand Final!”

The desire to keep learning and push himself was Brad’s motivation for entering the Contest and watching his good friend, Will Grayling, compete and win at Grand Final last year has proved as a bit of inspiration too.

“It’s good to have someone to look up to – I’ll definitely be giving him a call in the next couple of days.”

Brad is a keen fisherman but he may have to give up a bit of fishing time over the next few months as he prepares for a very full on week at the 2012 Grand Final. He’s also into hunting and playing cricket and has been a member of New Zealand Young Farmers Opiki Club for four years. Brad has been involved in community fundraising projects through NZYF and has also helped fundraise for the local community hall.

The $10,250 pack also included a Honda XR125 two-wheeled farm bike valued at $4000, $1000 cash and $500 towards a capability development programme from AGMARDT, $1000 worth of Ravensdown quality fertiliser products, $1000 from The National Bank, clothing valued at $750 from Swanndri and Silver Fern Farms will provide a package of quality produce valued at $500.

Three TeenAg and AgriKidsNZ teams will also be heading to Grand Final in Dunedin on May 25th. The Toko Cow Girls from Toko Primary were first followed by the Milky Bar Kids from Ngaere Primary School and South Mak 3 from South Makariri School.

The TeenAg title was taken out by Rebecca Williamson and Corey Horn from Horowhenua College followed by David and James Burroughs from Stratford. Kurt Armstrong and Luke Roberts from Palmerston North Boys High were third.

For more information go to www.youngfarmercontest.co.nz