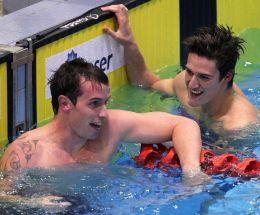 Daniel Bell (left) and Gareth Kean celebrate after both went under the London Olympic qualifying time in the 100m backstroke at the State NZ Swimming Championships tonight. CREDIT: Photosport

Twenty-year-old Matamata swimmer Matthew Stanley rewrote the record books for a second straight night at the State New Zealand Swimming Championships in Auckland tonight, which doubles as the Olympic Trials.

Stanley, who swims under coach Scott Talbot at the High Performance Centre, beat the great Danyon Loader’s national record for the second time in winning the 200m freestyle and go under the qualifying time for the London Olympics at the West Wave Aquatic Centre in Henderson.

This follows his record effort in the 400m freestyle on the opening night.

It also marked another outstanding night with four more performances under the qualifying standard for London and two New Zealand records.

The highlight was the men’s 100m backstroke where Wellington’s Gareth Kean and North Shore’s Daniel Bell both went under the standard.

The night was finished by the outstanding North Shore swimmer Lauren Boyle who beat her own national record in winning the 400m freestyle.

Stanley was in a class of his own in the 200m freestyle clearing out to win in 1:47.57 which is 6/100ths of a second inside the national record set by Loader in winning gold in the 1996 Atlanta Olympics.

Watching from the stands was Loader who was thrilled with the performance.

“I’ve watched both nights with Graham Laing who was his old coach before he moved to the High Performance Centre and Graham is the son of my coach,” said Loader. “He is a really good talent and you know if he did that 16 years ago it would have won him a gold medal.”

Stanley, who posted his second straight time in the top 10 in the world this year, said he is now resetting his sights on performances in London.

“I came here to get multiple qualifying events for London. I’ve achieved that and I am excited about it. But I don’t just want to attend the Olympics, I want to achieve, so there’s a lot of hard work to come.”

Kean posted the fifth fastest time in the year to date in his morning heat of the 100m backstroke in 53.58 and was only fractionally slower in the final winning in 53.84.

The big news came from 21 year old Daniel Bell, coached by Thomas Ansorg at North Shore, who came out of the wilderness after a challenging few months to finish second in 54.39 which was 1/100ths of a second inside the Olympic qualifying mark.

“It’s been a hard few months. I changed coaches and then had a bad swim at the Australian Trials last week. I guess I got the bad one out of the way and tonight was a second and a half faster than my best for the year. I am there and now and I am elated. Now I can focus on the hard work,” Bell said.

Boyle was also in a class of her own in dominating the 400m freestyle in 4:05.83 which shaved 3/100ths of a second off her national record set at last year’s world championships and was also almost four seconds under the Olympic time.

The 24 year old, coached by Mark Regan at the High Performance Centre, was delighted to post the seventh fastest time in the world this year after such a long build-up.

“I haven’t competed since last September and it’s been such a long build-up,” Boyle said. “I knew I was in great shape, how can you not be with that amount of hard work? But you don’t know how that will relate in competition so it’s exciting to be swimming fast right now.”

In other finals North Shore’s Penelope Marshall, a member of the women’s freestyle relay team that finalled at the world championships, showed her variety in winning the 100m backstroke in 1:01.78 from teammate Melissa Ingram; North Canterbury’s Natasha Lloyd, 16, won the 100m breaststroke in 1:11.38 while North Shore’s Samantha Richter broke the national record twice today, clocking 26.66 to win the non-Olympic 50m butterfly.