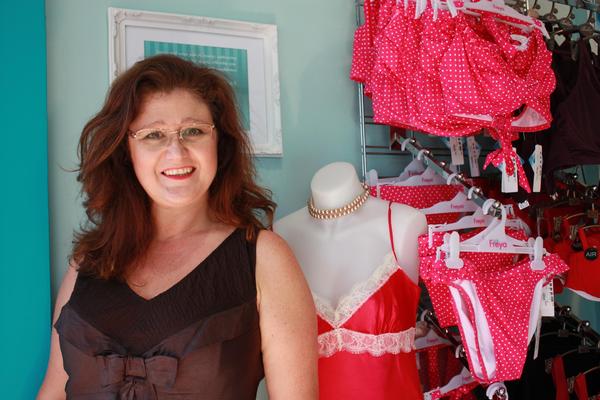 A Christchurch lingerie and swimwear store which rose rapidly from the September 2010 earthquake has just won a major Recover Canterbury award for its tenacity and resourcefulness.

Kirsten Billcliff, who owns Savoir Lingerie and Swimwear of Merivale, lost her Beckenham shop in the first big quake 19 months ago.

Billcliff says she initially did not understand the enormity of the shop damage as her initial thoughts were on family, friends and their homes.  The block of shops that housed her original store is now long gone, just one of many empty sites in the city.

``The first I knew the shop had received extensive damage was a text on the Saturday of the quake from friends who had driven past.  We drove into Christchurch (we live out past Darfield) two days later to inspect the shop.   We were shocked by the state of the building and a couple of days later we retrieved everything we could.

``I wondered what on earth I was going to do and seriously considered ceasing trading.  What changed my mind were the incredible emails and calls I received from our customers.  Some brought tears to my eyes.  They gave me the strength to continue.  I founded my business on relationships so it was emotionally recharging to know that foundation remained in place.

``I did have business interruption insurance.  However, the battle to extricate funds has been exhausting and soul destroying.

``We had to threaten legal action to get our September entitlement paid to us.  It took over a year to get any funds for our February 2011 claim and we are still waiting for funds for our June 13 claim.’’

Billcliff drove the streets of the damaged city in search of new premises for Savoir. Finally in October she saw a vacant shop in Merivale.  Builders had two weeks to convert a dark, dirty and empty shell into a little boutique and Savoir opened for business again on November 1, 2010.

When Christchurch was rocked by the big quake of February 22 Billcliff was at another shop on Papanui Rd at the time.

``I jumped in the car and headed back into Merivale when the large aftershock hit, and the front of the Quinns building fell down.  I jumped out of the car at that stage and ran the rest of the way to the shop, fearing that a similar thing could be happening at our shop: fortunately not. Knowing the drill I simply let myself in, grabbed the cash till and computer hard drive and headed out.

``The biggest impact of the February earthquake for me was the loss of my key staff who felt unable to continue working, with one actually fleeing the country. The morning of February 22 was actually the last time I saw her.

``Initially this was a major blow as I was once again a one-woman show, although my long-serving Saturday girls helped out wherever possible. However, every cloud has a silver lining and with assistance from Recover Canterbury, I have been able to employ new staff members who are utterly outstanding in their field.  Our team is now stronger, more passionate and knowledgeable than I could ever have dreamed of, so I can only consider all that we have gone through to be a blessing in terms of the future. ‘’

Billcliff said June 13 hit Savoir especially hard.  The shop glass frontage popped out, stock and fittings were damaged and they were closed for a week for inspections and repairs. Two big quakes on December 23 made her wonder fleetingly whether she had the energy to carry on the business

``I know my staff overcame a lot of different emotions to come into work the next day, and I am grateful for their loyalty and support.  The loss of trade two days before Christmas hit us hard, however, we cannot control the earthquakes, only how we react to them, so we are determined to maintain our forward focus and positive attitude.’’

Many of the original Beckenham customers continue to shop with Savoir, and Billcliff said thanks to that loyalty and support they are still in business today, with two full-time and three part-time staff.