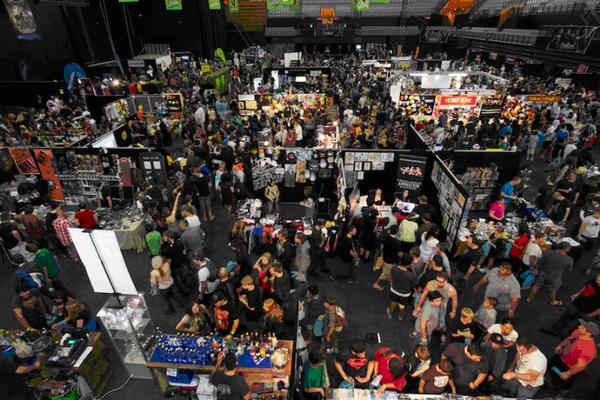 Claudelands Turns It On For Armageddon Expo

Claudelands was put to the test last weekend as thousands of Twihards, zombies, Dr Who and anime fans converged ready to meet the stars of the biggest pulp culture event in New Zealand, the Armageddon Expo, its first ever visit to the region.

The first stop in the 2012 Australasian tour, Armageddon Expo set the challenge for Claudelands, infiltrating all parts of the venue including using the main arena for the exhibition, conference rooms for events and seminars, satellite rooms for anime screenings and green rooms and the exhibition halls for the more energetic attractions like professional wrestling and laser strike. Even outside spaces were utilised for a theme park and parking.

The venue passed with flying colours prompting Amageddon Expo owner Bill Geradts to comment, “It was truly the best ‘first event’ at a new venue we’ve ever had.

“Claudelands is a brilliant venue for Armageddon! More than 12,000 people attended across the weekend, totally exceeding our expectations, but not causing any problems in terms of the venue dynamics, exhibition space or security,” said Geradts.

An organised Zombie Walk was a gruesome highlight of the Armageddon Expo; hundreds of groaning zombies lurched their way from Claudelands, up Hamilton’s main streets and into Centre Place Shopping Centre where Geradts says centre management were “most accommodating” given the amount of blood thrown around.

Ticketing data showed Armageddon Expo fans travelled to Hamilton from all over the country, even as far away as Whangarei, Christchurch and Invercargill, to attend both days of the event.  Armageddon also drew a very strong representation of visitors from the Auckland and Bay of Plenty regions to Claudelands.

Murray Jeffrey, Claudelands Director of Business Development & Marketing believes Claudelands proved its worth as a world class venue in Hamilton “An event like Armageddon demands real versatility from a venue” said Jeffrey.

“All areas of Claudelands were involved in making the event a success; from the speed at which the queues for tickets were processed, to the conference centre and main arena hosting the exhibition, signing and panel sessions - each aspect played a vital role in ensuring that the first Armageddon Expo in Hamilton ran without a hitch”.

Since it’s inception in 1995, the Armageddon Expo has grown to become the largest fantasy event in Australasia.  With shows in Auckland, Wellington, Christchurch, Melbourne and now Hamilton, it’s clear the Armageddon Expo continues to embody the ever growing pulp culture phenomenon.

“We’ve wanted to bring Armageddon to Hamilton for a long time,” said Geradts.

“And we were right in thinking that fans want Hamilton to have an event like this – we’re already planning what we can bring back to Claudelands in 2013!” says Geradts.