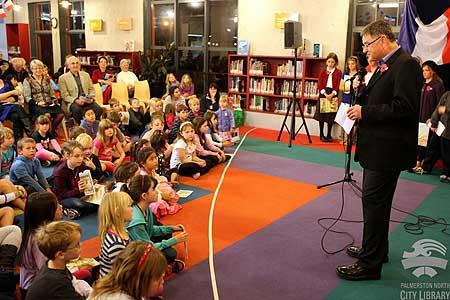 Professor of war studies Glyn Harper’s latest book, his seventh for children, is already on the best-sellers list, just weeks after release.

Les Quesnoy: The story of the town New Zealand saved, tells of New Zealand soldiers who liberated the small French town in the final days of World War 1.

More than 200 people were at the book’s launch at the Palmerston North City Library on Friday.

The book, officially released on March 28, is now number three on the Neilson best-sellers list for New Zealand children’s book.

Professor Harper says children are “hungry for these stories”, and he plans to write two more, including a children’s book on Gallipoli, in the near future. “It’s about giving children a taste of dramatic events and important moments in history in a way they understand,” he says.

The story is told through the eyes of a young French girl living in the town. It describes the hardships of the four-year German occupation and the dramatic liberation by New Zealand soldiers, who scaled walls, captured the occupiers and freed the town.

Professor Harper says the town has never forgotten and now through this book, the next generation of New Zealanders will learn the story.

He is also leading the Centenary History of New Zealand and First World War project, with 10 volumes in the series, exploring different aspects of the war. The first will be ready for Anzac Day 2015.

Professor Harper gave a lecture at Massey’s Manawatu library today (Monday April 23) on the collaborative project with Returned Servicemen Association and the New Zealand Defence Force and says the series is an opportunity to tell the story of New Zealand in WW1 in a new way.

Over the last 10-20 years new resources have emerged, archives opened, more personal recollections found, and a lot of stories have yet to be told, he says. “We want to produce something never done before and that tells stories in a complete way.”