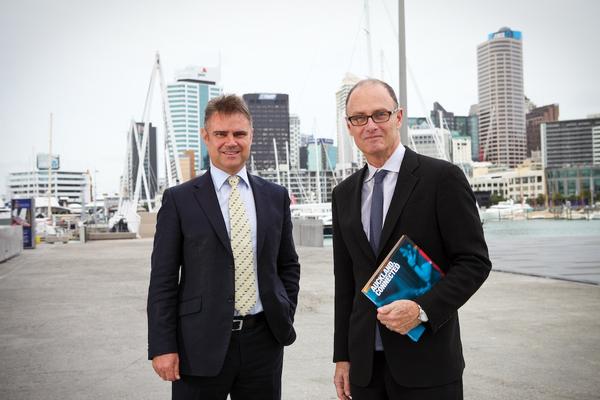 An integrated transport system, vibrant businesses, a third harbour crossing, and improved health and education services are what Aucklanders can look forward to by 2040 if the city gets focused, takes action and builds investor confidence according to a new study by the AECOM Global Cities Institute.

In its book titled Auckland, Connected, the Institute identifies affordability as a key challenge and recommends that Auckland Council be ruthless in its prioritisation of projects that will drive transformational change.

AECOM’s New Zealand Managing Director, Dean Kimpton, said Auckland is at cross-roads. “By 2040, it will be a very different city. Auckland is set to grow from a population of 1.5 million to an estimated 2.4 million. This substantial increase will have a major impact on transport, housing and other infrastructure.”

“The investment required to make Auckland the most liveable city is more than Council can deliver alone – Auckland needs to be public sector stimulated, but private sector-driven. The Council must inspire confidence and collaboration between the public and private sectors to attract investment and focus on critical facilities and infrastructure to ensure realistic funding,” he said.

Auckland, Connected is an in-depth response to the Auckland Plan. It is titled Auckland, Connected because it signifies that, at the heart of a transformed Auckland, is a city interconnected, with its economy, society and the physical and natural environment. The book examines how New Zealand’s largest city can address the challenges and opportunities facing its urban development around four key areas: economic growth, transportation, urban form and liveability.

“Auckland is a great city. It’s culturally diverse with a wonderful natural environment, but these attributes alone are not enough,” said AECOM Chief Innovation Officer and Head of the Global Cities Institute, Joe Brown. “By 2040, it will have made the changes necessary in its pursuit to become the world’s most liveable city, or it will have let the status quo prevail. Given the choice, we believe Aucklanders will support real change that will enable the city to realise its full potential.”

“The city cannot look at each of its urban problems in isolation. Transport for example, needs a designer’s eye. The economy benefits from a guiding social mission. Buildings are just as important as the spaces between them. A beautiful waterfront needs an economic engine to be successful,” said Mr Brown.

The AECOM Global Cities Institute worked alongside the Auckland Council, the New Zealand Institute and the University of Auckland, and lays out an interconnected blueprint for how Auckland can transform itself into a world-class city.

The book draws comparisons between Auckland and other highly ranked liveable cities (Sydney, Melbourne, Vienna, Vancouver, and Helsinki) and provides insights from international approaches and how these could be applied locally. For example, it examines transport approaches in Singapore’s Land Transport Authority Land Transport System and the CycleCity initiative in Sydney. It also draws on the Institute’s experience from working with Beijing, Jeddah and Phoenix.

For more in-depth information about the contents of Auckland, Connected, please see the following sections below:

1. Key recommendations from the AECOM Global Cities Institute
2. Vision of a transformed Auckland in 2040

AECOM is a global provider of professional technical and management support services to a broad range of markets, including transportation, facilities, environmental, energy, water and government.  With approximately 45,000 employees around the world, AECOM is a leader in all of the key markets that it serves.  AECOM provides a blend of global reach, local knowledge, innovation and technical excellence in delivering solutions that create, enhance and sustain the world's built, natural and social environments.  A Fortune 500 company, AECOM serves clients in approximately 125 countries and had revenue of $8.0 billion during its fiscal year 2011.  The company employs more than 550 staff in New Zealand located in Auckland, Hamilton, Tauranga, Wellington and Christchurch. More information on AECOM and its services can be found at www.aecom.com.

About AECOM Global Cities Institute
AECOM’s Global Cities Institute partners with cities to diagnose their most pressing issues bringing together the best expertise in a multi-disciplinary laboratory that goes beyond traditional practice to develop solutions to urban challenges of selected cities. The Institute draws on AECOM’s fully integrated planning, design, engineering and management capabilities in New Zealand, Australia, the United Kingdom, the United States and beyond. Cities the Institute has focused on include Beijing, Jeddah and Phoenix. More information can be found at www.globalcities.aecom.com.

1. Key recommendations from the AECOM Global Cities Institute include:

Creating a high-value economy underpins Auckland’s success. The city must move to an innovation-based, high value knowledge economy. It can do this by building skill levels in higher value industries, growing high value export industries serving international markets, getting better connected to other parts of New Zealand and the world, and lifting annual productivity to match or exceed that of major trading partners.

Developing policies for economic development in a carbon-constrained future and development of Auckland International Airport as an economic gateway to the world are also key.

Embracing innovation is at the heart of creating a high value economy. The Report recommends enabling better innovation by co-locating the City’s universities, Crown Research Institutes and private sectors research and development facilities, for example a ‘Grafton Research Quarter’. This will attract investment and top students.

Supporting the development of high quality tertiary institutions and export education by improving co-ordination and funding across organisations is needed. The Report recommends reducing bureaucratic impediments and creating an executive board as part of the Mayor’s office to drive growth in the international education sector.

In addition, targeted investment in science and engineering will result in the establishment of start-up small to medium enterprises and future high value jobs.

Integrated transport – The price of congestion in Auckland has been estimated to exceed $1 billon per annum. While moves have been made to overcome Auckland’s poorly funded and integrated transport system, more needs to be achieved. The Report states that Auckland lacks a realistic funding model to address public transport. Road users are not paying the real cost for transport and this compounds the cycle of under investment. Realistic road pricing which could include through modern mechanisms – user charges and tolling, fuel taxes with effective collection methods, city development funding, parking/ congestion charges and levies, tax increment funding and private public partnerships – are cited as options to address this.

The land footprint devoted to Auckland roads is more than 100 times that for passenger rail and Auckland needs to put in place the City Rail Link transformational initiative, as well invest in ferry services. The use of smart technologies is needed to create efficiencies.

Inspiring confidence through credibility – The Council must be ruthless in its prioritisation of projects that will drive transformational change and leave other projects to private sector investors. For the Council, there is far greater impact, and credibility to be gained from completing a few projects well, than a mediocre response to a number of uncoordinated undertakings.

The book concludes that failure to embrace transformational change will mean Auckland will continue to lose highly skilled workers and fail to attract highly skilled migrants meaning it will lag behind more prosperous Australian and Asian cities. It will struggle to maintain quality health and education services due to wealth constraints and the city will be a gateway, not a destination, for tourists.

The AECOM Global Cities Institute was created to understand the most pressing issues facing a city or region and how to address them. The Institute draws on AECOM’s fully integrated planning, design and management capabilities to make cities and regions better.

The Institute works with cities around the world as a global think tank to diagnose their most pressing issues. It seeks to address the evolving role of cities and regions in realising social, economic and environmental aspirations. The Institute has previously partnered with Phoenix (Arizona, USA), Jeddah (Saudi Arabia) and Beijing (China).