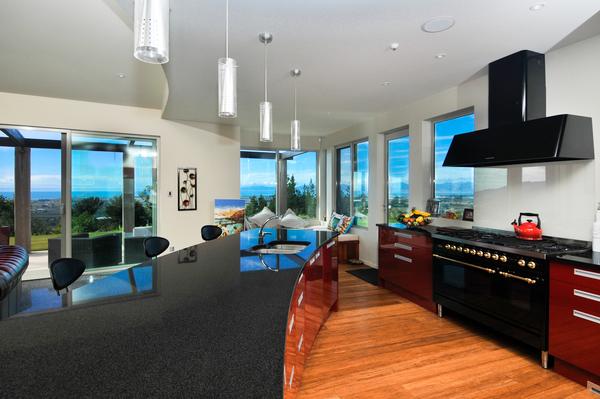 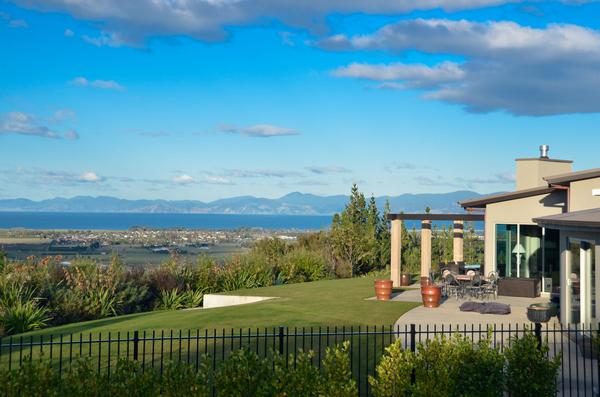 The coliseum of Motueka Valley for the ultimate games destination home

Architectural style and elegance in home design have spread throughout New Zealand over the past decade like the annual spring blossom of the pohutukawa.

Examples of majestic homes reflecting the imagination and passion of their owners and architects, can be seen in towns and provinces throughout the nation. In Motueka at the head of the South Island, the ultimate example of this trend is showcased at the coliseum of a home found at Motueka River West Bank Road.

Sitting regally above the fertile Motueka Valley, this beautiful home stretches out like an Olympic athlete accepting glory on a victory parade. The multi level home arches across 360 degrees of views over 422 metres of residence – while the vista stretches out as far as the horizon.

Landscaped gardens and manicured terraced lawns are like a red carpet leading up to the castle-like front door of this wonderful four-bedroom residence set amongst 13 hectares of native and pine forests on the banks below.

Immediately surrounding the home is the greenery of Motueka Valley and its trout-filled river, bordered by the blue waters of Tasman Bay, and ultimately a glimpse of Nelson City some 40 minutes drive away. In winter, the views morph’ to frame up the snow-capped mountain ranges to the west and D’Urville Island to the east.

With ground polished concrete floors throughout the communal areas, the north-facing stadium showcase of sophistication basks in the same all-day sun which replenishes the mature native forests at its feet. Taking advantage of this tilt towards the sun, large double-glazed windows offer magnificent views from the open plan lounge, dining room and kitchen.

The kitchen, like every aspect of the home, has had no expense spared in outfitting. The curved food preparation area features a black granite bench top, the double-door fridge/freezer is inset into high gloss wooden joinery, while the free-standing electric oven has six gas hobs, a grill plate, a teppenyaki plate, and multiple ovens. No need to head out to a café on Saturday mornings – as the kitchen has its own built-in coffee maker.

Designed with high-brow entertaining in mind, the kitchen has a totally separate walk-in scullery with floor-to-ceiling shelving behind a recessed sliding door, and its own stainless steel bench top and sink with integrated waste disposal unit.

When dinner is over, let the real fun begin…..  the games room at the Motueka River West Bank Road for example has room for a full sized pool and snooker table, one of the walls has a built-in cavity for a darts board, as well as a large screen plasma TV, and space has been created for a full size fridge to house not only beverages for watching those big games, but also a swag load of dips and nibbles to share with ‘the lads’.

For the more active sports fan, the home has its own gymnasium – which could easily be converted into another bedroom, while for the less energetic, the home has its own office which, again, could be converted into another bedroom or utilised as a library. At the end of all that strenuous activity there’s always the chance to jump into the sun-basking in-ground saltwater swimming pool – solar heated throughout the year and overlooking hectares of private native bush for total seclusion.

Or maybe just sit back in one of the numerous outdoor living zones – each with a different and eclectic viewing aspect – set among the highly-spec’d concrete pillars, hardwood timber columns and copper spouting.

The master bedroom at Motueka River West Bank Road boasts its own en-suite with walk-in wet space shower, while the home’s main bathroom has a glass-encased shower and a deep Victorian-style bath tub. Other amenity rooms within the home include a laundry with exterior venting for dryer connections, and a temperature controlled wine cellar with ground cooling.

A separate one-bedroom cottage sits privately to one side of the property – suitable for a private guest amenity, sleep out for the teenagers, or for easy conversion to an office space. Motueka River West Bank Road is being marketed for sale by Tania Wilkins and Jan Long of Bayleys Motueka through a negotiation process.