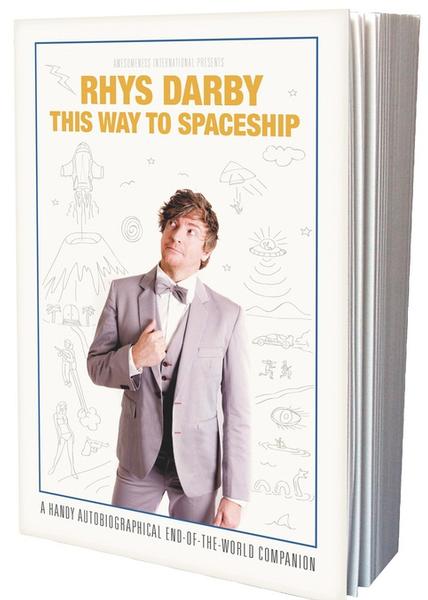 One of New Zealand’s best-loved comedians, Rhys Darby, will be bringing his distinctive brand of humour to Auckland this week.

The perennial funny man will appear at Whitcoulls Corner (210 Queen St) on Friday May 11 from 12.30pm – 1pm to sign copies of his new book This Way to Spaceship ($39.99 RRP, Hachette NZ). Then on Saturday May 12 he will be signing books at the Warehouse Sylvia Park from 12pm – 12.30pm,  before his session at the Auckland Writers & Readers Festival, which runs from 4pm – 5pm.

This Way to Spaceship is a handy autobiographical end-of-the-world companion and Darby’s unmistakable voice leaps from the pages as he reaches back into his dramatic, unforgettable, action-packed life to show readers how they can get noticed, make it big – and survive the possible Armageddon at the end of 2012.

Darby will also perform his new comedy show, based on the book, at the SKYCITY Theatre this week and he will be available after each of the shows to sign books.

Darby gained international fame as Murray, the manager, in the cult HBO television show Flight of the Conchords. Since then he has developed an outstanding film and TV career in the UK, US and NZ. Prior to his onscreen accomplishments, Darby found success as a stand-up comedian specialising in his own unique brand of quirky storytelling.