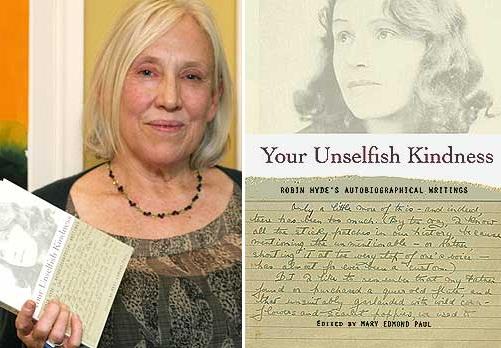 The book’s title Your Unselfish Kindness (Otago University Press) are Hyde’s own words to her doctor describing his treatment when she was a voluntary patient over a three-year period at The Lodge in the 1930s. The Lodge is a villa attached to the former Auckland Mental Hospital in Avondale.

The book is attracting interest from mental health professionals wanting to know more about its history and therapeutic approaches, says Dr Paul, who is based at the School of English and Media Studies at the Albany campus.

Treatment, involving talking and journal writing, helped enable Hyde to overcome her emotional troubles, she says. While at the Lodge Hyde wrote five major novels including The Godwits Fly, now a classic.

Your Unselfish Kindness contains a 190-page manuscript written in 1934 and addressed to her doctor and psychiatrist Dr Gilbert Tothill. He had suggested she write her life story when she became his patient as a way of helping her understand events that precipitated the breakdown that brought her to the facility.

Hyde’s writing “deals with personal material – injury to her knee, drug treatment and abuse, betrayal, loss of a baby and love affairs – in a way that is designed to explain and sometimes perhaps even exonerate her from the judgement of her doctor and the severe judgements of the time,” says Dr Paul, whose published name is Mary Edmond-Paul. Her comprehensive introduction provides background and interesting insights into the role of voluntary villas as alternatives to mental asylums, or mental hospitals as they were re-named.

She says the use of life writing and “talking therapy” based on emerging ideas from psychoanalytic developments in the United States and Europe was relatively new and experimental in New Zealand mental health services at the time. Hyde’s experiences were relatively positive and helpful, in stark contrast to another renowned writer, the late Janet Frame, who was incarcerated in the main ward of an asylum and given electric shock treatment a decade later.

The book also has journal fragments, poetry and a short story, The Cage with the Open Door. The title refers to the Lodge, and the story is a fictional account following her thoughts and movements of her day on parole.

Hyde (1906-1936), real name Iris Wilkinson, lived an extraordinary life as a journalist and parliamentary reporter, poet, novelist and war correspondent reporting on the Sino/Japanese war, and was twice a single mother. But the author of famed novel The Godwits Fly, as well as other books of fiction, poetry and reportage, struggled with depression throughout her adult life, which ended in suicide when she took a benzedrine overdose while living in London.

The idea of publishing the autobiographical writings started with the support of a Marsden grant on Hyde’s life and writings with project managers Paul, Michele Leggott (University of Auckland) and Dr Patrick Sandbrook, Massey University, who did a PhD on Robin Hyde. This book is the third major publication to result from that grant.

Dr Paul has also received a Massey University Research Fund grant, and funding from the University’s School of English and Media Studies. She is also the editor of a book of essays on Hyde titled Lighted Windows: Critical Essays on Robin Hyde (2008).

Your Unselfish Kindness will be launched this Friday as part the Auckland Writers and Readers Festival.