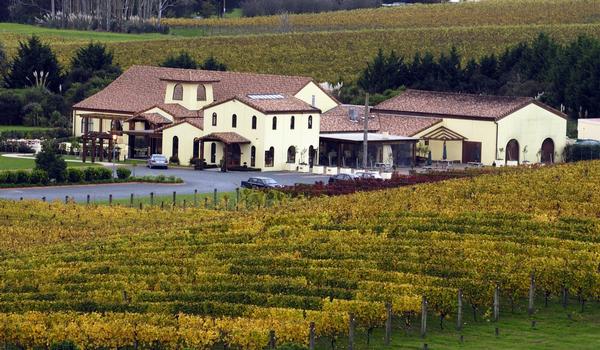 Landmark winery and hospitality venue Ascension Wine Estate at the gateway to Matakana is offered for sale for the very first time. CREDIT: Bayleys

A pioneering winery and hospitality venue which has gone on to become one of New Zealand’s most award-winning wine and food businesses is being offered for sale for the first time.

Ascension Wine Estate at Matakana just north of Auckland was established in 1996 by husband and wife team Darryl and Bridget Soljan. Ascension was one of the earlier wineries planted in the valley – gateway to the upmarket coastal seaside resorts of Omaha and Leigh – and went onto become the biggest hospitality operator in the region.

Branching out from the original winery, Ascension quickly expanded to operate a large restaurant in 2000 before adding an additional 300-person function venue in the mid-2000s.

However, with a ‘hospitality empire’ now established, Darryl Soljan is looking to capitalise on the venue’s success and move on. The Ascension business is being marketed for sale through Bayleys Real Estate by Michael Pleciak and Mark Macky, with international tenders closing on June 14.

“We’ve had 16 wonderful years at Ascension since we planted the first vines in 1996, and the lifestyle has been all you could ever ask for,” said Darryl Soljan – part of a wine-making dynasty stretching back over several generations with roots in Croatia and West Auckland.
“From what started as bare land and became a vineyard and winery, then a sizeable restaurant, then a

function venue, and then a large-scale entertainment destination…. the evolution has gone beyond all we ever dreamed of at the beginning.

“But I’ve taken Ascension as far as I can. I have an entrepreneurial spirit and at 42- years-old, I need a new challenge. The whole experience has been an incredibly rewarding journey and a lot of hard work – but it now requires and deserves someone with a new burst of energy, contacts, and resources to take it to a new stage. There is plenty of untapped potential.

“I’d also promised the kids an African safari before they finish high school, and time is running out,” laughs Darryl.

Ascension Wine Estate is a four-time national winner at the Hospitality New Zealand Awards for Excellence, six-time winner at the local Manaakitanga Awards, awarded the New Zealand Beef & Lamb Hallmark of Excellence every year since 2004, and has received numerous other accolades in wine, food and lifestyle publications.

Conscious of the surrounding environment, Ascension has also been commended by the Ministry of the Environment with the presentation of a Green Ribbon Award for Sustainable Business

Mr Pleciak said the profitable Ascension business benefitted from its diversity of multiple revenue streams. The wine production, the restaurant which operated all year round, the well-patronised wedding and function venue, the corporate retreat amenities, and the entertainment venue which attracts huge crowds over the summer months, had cumulatively resulted in confirmed forward bookings of almost $1million.

“Each of those proven income streams has further growth potential – building on the existing platform of a decade of consistent income which has broadened across non-competing sectors all in one location,” Mr Pleciak said.

“The wine production in particular benefits from being part of a vertically integrated business that sees Ascension booked virtually every weekend throughout the year. This business model ensures that Ascension’s events and wine production sell out directly to guests at the property or over the internet. The business has a special VIP database of more than 12,000 active customers.

“Weddings are big over the summer, with good growth in ‘off-peak’ months, while indoor entertainment ensures strong patronage on weekends over winter, and Ascension’s repeat-business corporate clientele utilise the facility for one and two day conferences, gala dinners and Christmas functions.”
Ascension sits on 7.6 hectares of north-facing land on a highly prominent stretch of the main road into Matakana from Auckland. The land has four hectares planted in vines, surrounded by mature gardens and lawns.

Because all wine sales are direct to the public in one aspect or another on-site, Ascension has been an innovator with rare and unusual varieties - such as viognier, flora, malbec, pinotage and tannat all grown on site. The varieties sit alongside the more familiar chardonnay and sauvignon blanc labels whose juice is sourced from Marlborough. The associated winery includes production equipment such as a basket press, crusher, pumps, tanks, and a barrel aging facility.

Nearby, the substantial restaurant and commercial kitchen are licensed for up to120 guests – with additional open and covered courtyards allowing for several private functions to be catered for simultaneously. Entrance to the dining area is through the tasting room and retail shop.

The venue’s 710 square metre fully air-conditioned function centre, named The Belfry, can be configured into multiple spaces with the potential to host up to 300 guests in various seating styles, and features full audio-visual equipment. Within The Belfry is a VIP dining room suitable for intimate dining occasions of up to 20 people. Ascension’s total development comprises 2800 square metres of solid concrete, natural timber and imported terracotta tiles in the style of the Spanish Mission at San Luis Obispo in California – one of Darryl and Bridget Soljan’s favourite places.

Included in the land and business for sale is a small winemaker’s cottage set among the vines, and a large implement shed to house the tractor, vine trimmer, mowers, and leaf removal machine.

Ascension’s various commercial activities employ 28 fulltime-equivalent staff – a number that swells to 45 employees over the Christmas/New Year holiday period when Omaha, Leigh, and Matakana holiday homes are at their peak occupancy levels.

Approximately $500,000 worth of wine stock is available for purchase separately from Ascension’s other business assets and chattels.