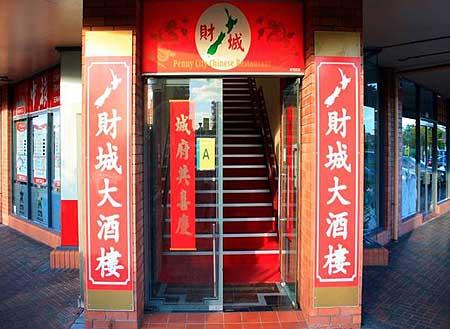 One of the 500 images in the study of Asian language signage now common in some Auckland suburbs. CREDIT: Massey University

The proliferation of Asian language signs in Auckland creates a sense of belonging for new migrants, and a space for others to experience and learn about migrant cultures that contribute to the city’s cosmopolitan character, according to a Massey University study.

With Auckland’s Asian population expected to make up a quarter of the city’s 1.3 million people in five years’ time, and with migrants currently around 40 per cent, the need to understand the role of the city’s ‘linguistic landscapes’ is critical, says study co-author Associate Professor Robin Peace, from the School of People, Planning and Environment.

She and Dr Ian Goodwin, from the School of English and Media Studies, studied 500 photographs of Asian language signs taken from areas in Auckland that have high concentrations of Chinese speaking settlers, including Northcote, Dominion Road, Meadowlands, Papatoetoe and Auckland’s CBD. Their work is part of on-going research by the Integration of Immigrants programme, run by Massey and Waikato Universities.

The researchers say language signs – described as manifestations of a “linguistic landscape” – have several functions, including reflecting the identity and shared interests of ethnic groups, particularly business networks.

“People who read Chinese recognise Chinese language signs as belonging to ‘their’ world; they reflect and enable shared interests. Local Chinese may participate in economic and social activity regardless of their English language capacity,” the authors say.

Signs written in ‘home languages’ help shape a sense of security, familiarity, community and a sense of possibility for new migrants in Auckland’s urban landscapes – all positive aspects, Dr Peace says. Despite concentrations of ethnic commercial and residential activity sometimes being a source of discomfort for the dominant English-speaking culture, they can be seen in a more positive light as an act of “homebuilding” in the host country.

They note that some English speaking Kiwis may react negatively to finding themselves surrounded by signs they can not translate or understand. But the real value of cosmopolitan linguistic landscapes is that they may encourage members of the host communities to cultivate ways of knowing and interacting with new migrants, they say.

One example is the way the restaurant trade – which relies heavily on signage – invites reciprocal cultural exchange around a shared love of food.

“On the one hand,” says Dr Peace, “a Chinese restaurant, for example, provides the host community with an experience of being ‘away’. It can widen the interactions by producing ‘ethnic’ catering redolent of foreign places: the exotic otherness of Cantonese cuisine or Beijing hotpots that the host nation’s citizens enjoy. Great food at a great price and wow - wasn’t the décor authentic!

“On the other hand, restaurants cater to the displacements and homesickness of the local Chinese for whom the prospect of toast and sandwiches wears thin. For the New Zealand resident Chinese, the restaurant offering ‘home cooked’ food or ‘just like mama’s cooking’ brings a sense of home to the alien surroundings of their new place”.

Her interest in the research was sparked after a visit to Auckland to see, first-hand, the areas of new migrant concentrations in Summerville, Papatoetoe, Northcote and the central city.

“What struck me, as a cultural geographer, was the profound changes that had occurred in what were once, from my childhood, familiar landscapes,” she says. “It seems to me that these are places where new settlers are working out how to be at home, how to belong, how to feel safe in much the same way that my parents did when they arrived in New Zealand: they surrounded themselves with things that were familiar, English gardens, English schooling, sandwich bars and strong tea, and over time worked out that this was a place where they could settle down.”

The study involved close analysis of photographed, translated signs against the framework of emerging international research on linguistic landscapes among migrant groups in Canada, Europe, Israel and Japan, to set the scene for future research in New Zealand.

Auckland’s Asian language signs, the study concludes, depict the process of integration as driven by migrants’ desire for belonging, to feel at home and to be part of the social fabric. They also offer one way to read the complexity of migrant experiences, which the researchers plan to investigate further.