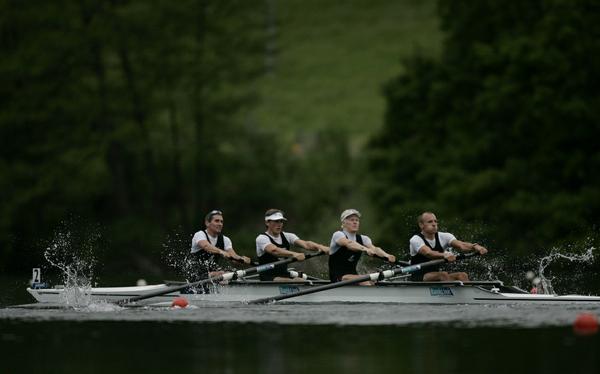 From left &#8211; Duncan Grant, Graham Oberlin-Brown, James Lassche and Curtis Rapley qualify for the A final and keep their chances of a place in London alive. CREDIT: Rowing New Zealand

Olympic dreams now just one race away for lightweight four

New Zealand's lightweight four is still in the hunt for a place in London after taking one of the two vital top two finishing positions in the repechage to progress to the main A Final in the Last Chance Regatta at Lucerne, Switzerland.

Two from the A Final will qualify for the Olympic Games and New Zealand's crew of Curtis Rapley, Graham Oberlin Brown, James Lassche and Duncan Grant will be vying for one of those spots against the USA - who led them throughout the repechage by a small margin, Spain and Brazil from the other repechage, and the heat winners on Day 1 who qualified directly, the Netherlands and Serbia.

A comparison of times suggests a four horse race for the two Olympic places - with New Zealand and the USA chasing the Netherlands and Serbia.

The regatta concludes tonight New Zealand time with the moment of truth for both the four and the men's eight looming.