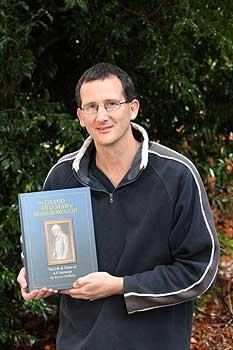 An interest in finding out more about his family history five years ago has led to a Massey staff member producing a 600-page book.

Kerry Griffiths, a technician in the School of Engineering and Advanced Technology at Manawatū, says he has uncovered at least one little known fact about New Zealand's history in the process: That Picton rather than Blenheim is still officially the provincial capital of Marlborough.

His book, The Grand Old Man of Marlborough – the life and times of AP Seymour, is self-published and printed by the Massey Printery, with a first edition of 80 copies produced for interested family and friends.

It tells a story based around Mr Griffiths' great-great-grandfather, Arthur Penrose Seymour (1832-1923), who was the elected Superintendent of the Marlborough province in 1864 and again from 1870 until 1876 before the abolition of New Zealand's provinces as a form of sub-national government. Mr Seymour then represented various Marlborough electorates in the House of Representatives and the Legislative Chamber in Wellington.

Picton, which has a population of about 3000 and is now part of the Marlborough District territorial authority, run from Blenheim (population about 30,000), became the provincial capital in 1859 when Marlborough split from the Nelson province.

Mr Griffiths says although the seat of Government changed from Picton to Blenheim in 1865, there was no accompanying law change or proclamation that Blenheim was now the capital of the province.

"Because a year earlier the capital of New Zealand had moved from Auckland to Wellington, and the title of capital was seen to follow that change, people presumed that the same must apply to Marlborough," he says. "The Mäori Wars were raging at the time and people’s attentions were elsewhere. No one ever challenged this wrong move of the title of capital. What’s more, the new newspaper, the Marlborough Express, started at the same time, and they announced publicly that they were setting up in 'Blenheim, the new capital of Marlborough'.

"Because Blenheim wrongly attained the title of capital, it has now just continued to be so throughout all the provincial, county council, regional council days that have come and gone. And believe me, they still use the title of 'capital' on and off even these days when it suits. I would like to see Picton have its rightful day in the sun!"

Mr Griffiths also wanted to thank Massey Printery staff. "I am truly thrilled with the quality and care taken in the making of my book."