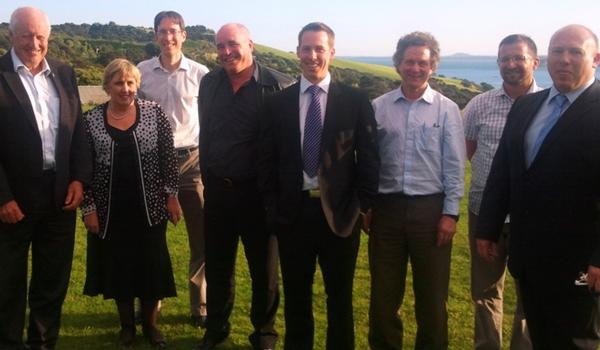 OBodies announces science advisory board and vision for future developments

Neville Jordan, Chairman of OBodies says, “OBodies is working in one of the fastest growing market segments in biotechnology alongside antibodies.  We’re very fortunate to have attracted leading scientists from New Zealand and overseas to the OBodies Science Advisory Board.   It’s a defining milestone in the company’s development.”

He says OBodies is targeting the global therapeutic and diagnostic market estimated to be worth around US$100 billion. “The world class science knowledge, expertise and networks the new advisory board will bring to bear will be of significant value as the company grows.”

Emeritus Professor Dick Bellamy is a virologist and molecular cell biologist.  Recently retired as Dean of Science at the University of Auckland, his research focus was double-stranded RNA viruses.  He is a Fellow of the Academy of the Royal Society of New Zealand and a Director of Auckland UniServices and subsidiary DNA Diagnostics which he co-founded.

Professor Margaret Brimble is the Chair of Organic and Medicinal Chemistry at The University of Auckland.  Her research focus is the synthesis of bioactive natural products as novel anticancer, antibacterial and antiviral agents, treatments for neurodegenerative disorders, and components for melanoma vaccines.  She is chair of the Rutherford Foundation and a member of the Marsden Fund Council and a Member of the New Zealand Order of Merit.

Dr Peter Senter is Vice President, Chemistry at Seattle Genetics where he leads their research into antibody-drug conjugate technologies.  He is an Affiliate Professor of Bioengineering at the University of Washington and Senior Editor of Bioconjugate Chemistry.

Dr Mark Baker, a clinical pharmacologist, is an Associate Director, Translational Medicine and Pharmaceutics at Medicines for Malaria Venture in Geneva, Switzerland.  He is currently working on the clinical development of antimalarial therapeutics from candidate selection to Phase IIa trials.

Dr Wayne Patrick is a Senior Lecturer at the Institute of Natural Sciences at Massey University.  His insights into problems in the evolution of protein structure, function and engineering and the commercialisation of biological enzymes saw him named NZBio’s 2010 Young Biotechnologist of the Year.  He also received a Rutherford Discovery Fellowship in 2011.

At the inaugural OBodies Science Advisory Board meeting the newly formed group focused on the vision for future developments for OBodies high affinity proteins (HAP's) which can be engineered for a wide range of specific therapeutic and diagnostic applications.

Emeritus Professor Dick Bellamy said the OBodies Science Advisory Board believes the technology has latent valuable potential as an emerging technology in therapeutics and diagnostics.  “The consensus is that OBodies represent a viable and potentially valuable piece of technology that could be used by biotech and pharmaceutical companies around the world.”

OBodies HAP products, which are patent protected, are derived from naturally occurring proteins and have the potential to enable new ways of treating and diagnosing diseases.  They have advantages over antibodies due to their stability, cost, small size and ability to customise binding and specificity.

Professor Bellamy said, “The Science Advisory Board was impressed with the work done thus far by OBodies and we’ve set a clear vision for the technology’s development.  We’ve made recommendations on key experiments the company should complete in the short term to validate the value.  This will lead to discussions with companies on collaboration for early market access and continued technology development.”