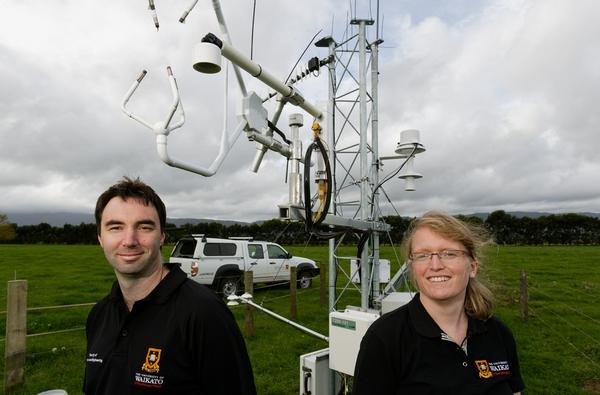 Twenty times a second they record the amount of carbon dioxide going in and out of the soil and they will keep measuring it at the same rate for the next year.

There’s something going on in the dairy farming pastures of New Zealand and a team of University of Waikato scientists is determined to discover exactly what.

They know the amount of carbon in dairy soils has reduced in recent years but they don’t know if it is still declining or has hit a plateau. And they also want to find out what management practices will best restore those carbon levels. It’s important because carbon supports life in the soil and declining amounts mean declining returns for farmers.

Lead researcher Professor Louis Schipper, co-researcher Dr David Campbell, research fellow Dr Susanna Rutledge and technician Aaron Wall are behind the testing which is being carried out under the New Zealand Agricultural Greenhouse Gas Research Centre and funded through the Primary Growth Partnership.

In addition to measuring the amount of carbon going in and out of the soil, the team must also factor in how much carbon is going out in other ways, such as milk or feed imports.

“There is a lot of carbon there and we are trying to measure a small change. You can’t just measure the total amount of carbon in the soil and come back a year later and measure it again. “

Professor Schipper likens the methodology to a household budget. “It’s like adding up all your bills for the year to work out how much you’ve spent but forgetting the Visa bill. You must include all the components,” he says.

The frequency of the testing, averaged out every half hour, will give them precise measurements and comprehensive data to enable them to determine how best to tackle the issue.

Then comes the clever bit – one of the towers at the farm will have one of its farm management practices adjusted and the results compared. The first adjustment will include greater plant diversity in the pasture to determine whether that makes a difference.

“There is good reason to believe that this will work, but equally we might have to say that didn’t work and try something else,” Professor Schipper says.

The work being done by the University of Waikato is just one example of research at the institution that makes a difference to farmers or land-based industry. The university is in its sixth year as one of two strategic partners at Fieldays which this year runs 13-16 June at Mystery Creek near Hamilton.