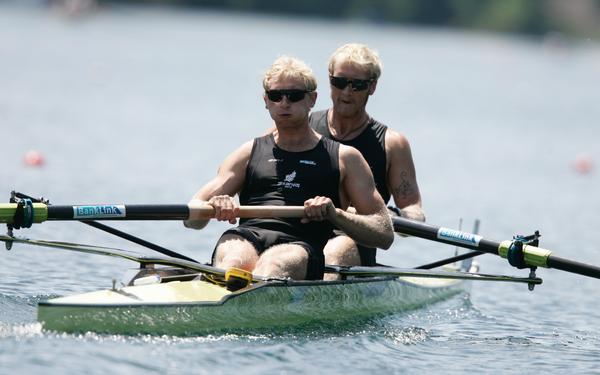 Bond and Murray win four in a row

Triple world champions Eric Murray and Hamish Bond made it four wins in four years at the World Cup regatta in Lucerne on a day when New Zealand's rowing team won one gold, three silver and one bronze medals.

A new battle in the men's pair has emerged to fill the void left when the British challengers moved to the four after a 14-0 run of defeats to Hamish Bond and Eric Murray with the arrival of an in-form Canadian crew.

Dave Calder and Scott Frandsen were silver medallists in Beijing and they served their intent to threaten the Kiwi supremacy in this event by leading the triple world champions to halfway. From then the pace of Bond and Murray began to assert itself and they edged away to a clear water lead at the line of about three seconds.

The win marked four wins in Lucerne since they formed their partnership after the Beijing Olympics and gave them the rare distinction of being unbeaten during an Olympic cycle at this key international regatta.

In one of the races of the day, Louise Ayling and Julia Edward put in another massive performance in their first international regatta together. They couldn't quite match the dizzy heights of their World Best time performance on Friday, but second to China by the narrowest of margins - two tenths of a second - was still a great result for the newest stars of the New Zealand rowing team.

Storm Uru and Peter Taylor took silver in their A final in another nail-biting race. Sixth at 500 metres in a blanket field, they moved to fourth at halfway and third with 500 metres to go, moving well clear of the British Olympic and world champions. Leaders Stany DeLayre and Jeremie Azou of France then came under increasing pressure from the Kiwis, holding on to win by about half a boat length.

Five time world champion Mahe Drysdale was involved in another epic race, taking silver just a few feet behind Ondrej Synek – these two emerging as hot favourites for London. Alan Campbell was dropped into the second half as the two fought it out, edging a lead on Angel Rodriguez of Cuba, a new force in world sculling who is improving with every regatta. It was neck and neck with the lead changing several times, but Synek’s last gasp sprint gave him the small margin he needed.

Double world champions Rebecca Scown and Juliette Haigh ended up third after a great race against the British and USA women's pairs final. A length or so off winning was a solid 2012 debut for the crew.

The women's quad scull of Eve Macfarlane, Genevieve Armstrong, Louise Trappitt and Zoe Stevenson put in a strong finish to take a good fourth place, but the race was dominated by the Ukranians, who won by a huge margin. Germany were second and the USA third.
The women's heavyweight double scull of Fi Paterson and Anna Reymer - bronze medal winners in 2010 - were fifth in their final, slightly off the pace of the leading three boats. It finished Great Britain first, Poland in second and Germany in third.

Boating team sub Steve Cottle instead of Matthew Trott, the men's quad always faced a tough challenge going into an A final with what was effectively a new combination, despite Cottle being a part of the quad programme last season. The field included the Russians, Estonians, Germans and the superfast Croatians. The Kiwis fell from the pace of the leaders early and for most of the race battled the Olympic champions from Poland. They did get their bows across the line ahead and took fifth - a very creditable performance.

Emma Twigg could not defend her 2011 title at Lucerne, finishing a disappointing fifth in a race dominated by on form Kim Crow of Australia but won on the line by Xiuyun Zhang of China. Mirka Knapkova of the Czech Republic was third.

After a promising regatta, the men's four of Sean O'Neill, Chris Harris, Tyson Williams and Jade Uru could not stay with a fierce early pace set by the Australians, with the fancied British crew a stalking horse in second place. At 500 metres they were in fifth engaged in battle with the Greek and Belarusian boats and they stayed in this fight to the end, though fell back to finish sixth some three seconds off the pack, with the British powering ahead of the Aussies in the final 500 metres to win.

Sixth in the B final was more than a little disappointing for world champion double scullers Nathan Cohen and Joseph Sullivan and there will be plenty of work to do for them before the final World Cup regatta in Munich.