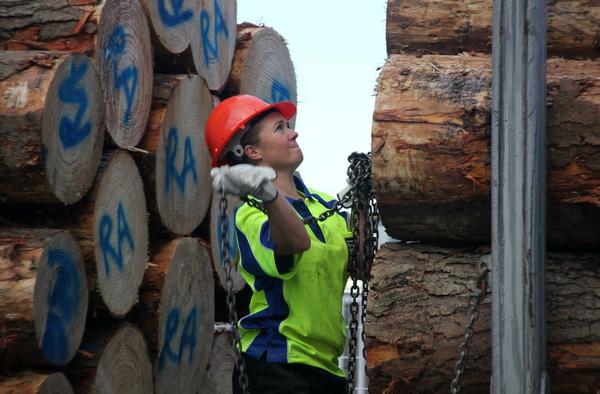 Katherine Tucker competes in the forestry module during the Practical Day at the Forsyth Barr Stadium. CREDIT: NZ Young Farmers

Forsyth Barr Stadium may not even be a year old but already it has seen its fair share of battle waged on its turf. Yesterday (25th May) however it wasn’t rugby that was drawing in the crowds – it was the Practical Day of The National Bank Young Farmer Contest for the 2012 Grand Final.

After 22 District Finals, seven Regional Finals and months of preparation the physically demanding Practical Day had finally arrived for the seven Grand Finalists. Over the course of the day they had their skill, knowledge and strength tested in front of a large and very vocal crowd.

Two main Challenges made up the Practical Day – the Ravensdown Agri-skills Challenge and the Silver Fern Farms Agri-sports Challenge.

The Agri-skills Challenge is designed to test the breadth of knowledge of the competitors and included seven 40 minute modules. These comprised of forestry, sheep farming, fertiliser and seed, a first aid station complete with simulated crash scene scenario, wool identification and ATV knowledge, and dairy farming. The Grand Finalists were even required to show their creative side by designing and gas cutting a kiwi bird out a large sheet of steel.

During the day the Contestants also came together to compete against each other in two Agri-sports Head to Head Challenges. There was plenty of noise and competition between the supporters as to who could make the most noise while the shearing challenge took place. Contestants had to bid for different amount of times to shear three sheep. It was Otago/Southland’s Pete Gardyne that bid on the least amount of time but the sheep, beef and arable farmer still finished shearing his sheep first. The cooking Head to Head Challenge saw Contestants dish up some Silver Fern Farms venison.

The big crowd pleaser that is the Agri-sports took place in the afternoon. The race course started with the Contestants abseiling from the stadium’s rafters before they completed a multitude of challenges. These included painting a picture using a paint brush attached to a digger bucket, building a bridge to drive an ATV over, beer testing and in true Scottish fashion the race ended when the competitors had to blow up and burst a balloon using only a bag pipe and a lot of lung power.

In a change to the Contest this year, all of the Technical and Practical Day Challenge winners were announced at The National Bank Sponsors Dinner held at Larnach Castle last night. After a traditional Haggis ceremony, host Dougal Stevenson invited Contest Sponsors to come forward and award trophies to the Challenge winners so far.

Northern’s Katherine Tucker and Aorangi’s Andrew Scott may not have take out any of the individual Challenges, but speaker and 2011 Contest Champion Will Grayling urged them to not give up. He said “the only section I won last year was the speech challenge and that was only by point three of a point – so it can still be done.”

Mr Grayling also spoke about his year as Contest Champion saying that it has given him the opportunity to rub shoulders with leaders in the agriculture industry and to learn from their experience. He said he was impressed with the way the Grand Finalists had handled themselves so far and wished them luck ahead of the big reveal tonight at the Televised Grand Final Evening Show. Tickets for the show at Dunedin’s Edgar Centre are available from www.youngfarmercontest.co.nz. The show will be televised live on TVNZ 7 at 7pm tonight.

The overall Contest winner will not only take away the prestige of the Contest Champion title but also over $70,000 worth of prizes from The National Bank, Lincoln University, Ravensdown, AGMARDT, Silver Fern Farms, Honda, Swanndri and Echo.

The AgriKidsNZ Grand for 2012 also took place in the stadium yesterday. Over sixty primary school students won their spot at the Grand Final after placing in their Regional Finals earlier this year. An Otago/Southland team took out the top spot this year: Prue Buckingham, Jessica Dermody and Lachlan Crosbie also known as the Tokonui Redbands were excited to be crowned the top AgriKids for 2012. Runner-ups were Emily O’Reilly, Hamish Scannell and Elizabeth Hampton known as Sheep, Beef and Dairy from the Aorangi Region. Issac Obsbaldiston, William Biss and Mercury Nisbet also known as the Alpaca’s had come all the way from Kamo Intermediate in the Northern Region – they took out third place.

The 2012 TeenAg Grand Final was also contested at the stadium. A brand new and much more challenging format saw the 21 teams tested both physically and mentally. Tom Monteath and Danny Brooker from Chirstchurch Boys’ High School were the 2012 Champions followed by Richard Gardyne and Robert Gregory from Gore. Third place went to another Christchurch Boy’s team – Tom Gore and Rory Mckenzie.

New Zealand Young Farmers members were also able to demonstrate a bit of regional rivalry in their annual Tug of War competition. Tasman and Northern made it through to the final but it was the members that had travelled all the way from the Northern Region that took out the title of strongest Region this year.