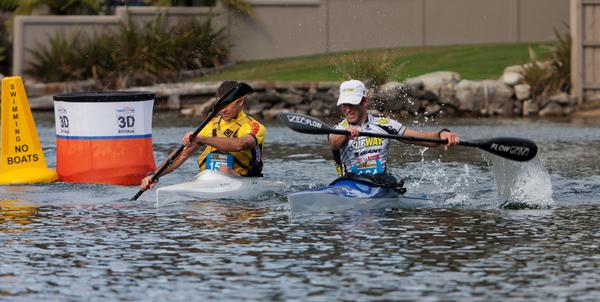 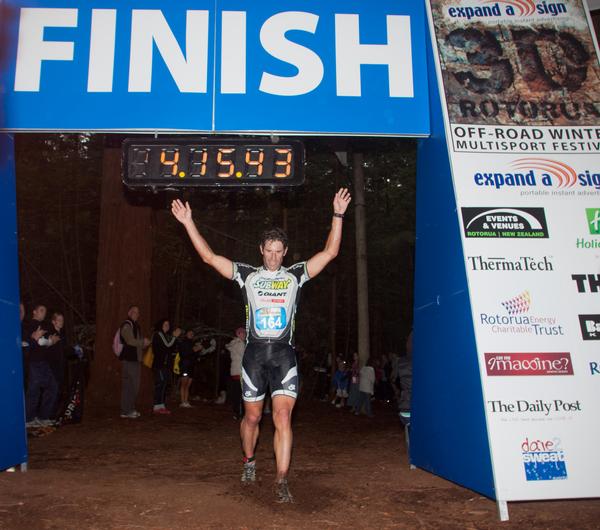 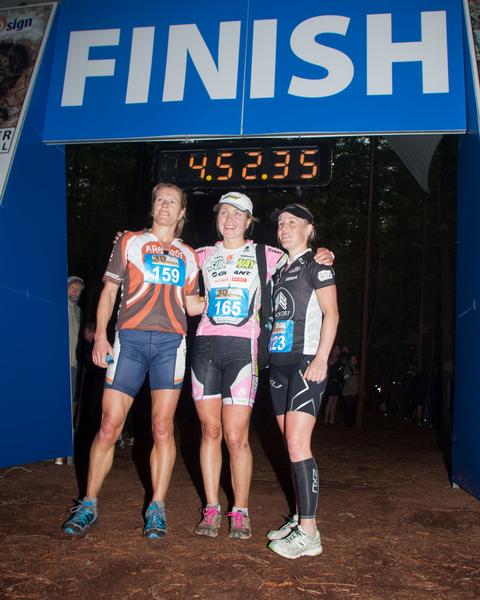 A regal Richard Ussher reigned supreme at the Australasian Multisport championships in Rotorua today, winning the feature race of the Expand-A-Sign 3D festival for the second year running.

Currie's time of 2:45:58 time was just a second off Ussher's time last year but with smooth conditions on the 8km kayak leg and a dry forest for the 30km mountain bike and 12km run, he finished 5:15 behind the Coast to Coast legend. Clark was a further 2:21 adrift, having been run down by Currie with 1500m to go.
"The race worked out as the ideal scenario for me and I was a bit surprised to get a gap on Sam in the paddle," Ussher said.  "I tried to ride really smooth through the technical stuff and without anyone right on my tail, I took it a bit easier to set it up for the run."

He had enough time after he'd finished to cheer on his wife Elina going past on her second run lap as she fought to reel in Rotorua local Nic Leary .  Elina's 3:14:14 time was also a new race record, more than 8mins faster than her winning time last year, although she was pushed much harder this year with Leary just 1:23 behind at the finish.

"I thought she'd come by me sooner on the run and when she didn't, I was trying to dig deep," Leary admitted. "I heard her behind me at the top of the quarry track and she just trotted up past me and off she went. I haven't been able to run much since Xterra and I was winging it today - I was pretty tired on the second lap of the run."

Australian Deanna Begg was third in the women's race, just 24secs behind Leary, but ahead of Nelson's Fleur Lattimore and another Australian, Kim Beckinsale.

The men's field had to chase Ussher from the start, although the endurance guru had some unlikely company in the paddle around Lake Okareka.

Australian veteran John Jacoby, a three-time Coast to Coast winner in 1988, 1989 and 1993, showed he'd lost none of renowned paddling strength, sticking rigidly to Ussher's wake for the entire 8km.
Although he faded in the bike, Jacoby had the satisfaction of finishing as highest-placed Australian, his 2:57:38 time good enough for eighth.

Currie worked hard to pick up Nelson's Trevor Voyce out of transition, which proved a key move.
"I jumped on the bike and just felt like rubbish - it took ages to get into it but lucky I had Trevor riding with me to keep me honest," Currie said.  "Without him there, I would've been gone."

Clark has worked extremely hard on his mountain biking in recent months, enabling him to move through the field.

"I was seventh coming off the bike last year and second this year, which just showed the work I've been doing," Clark said.  "I just couldn't hold on to Braden when he came past me on the run though - he was just too quick."