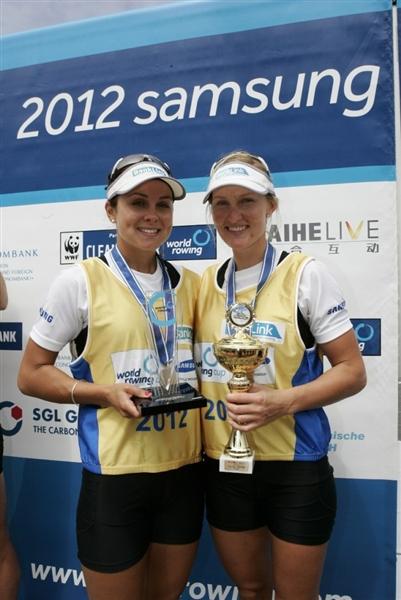 New Zealand came away with an impressive three gold and three silver medals in the final World Cup regatta in Munich on Sunday, the final test before the London Olympic Games.

A fast-starting French crew did not hinder Eric Murray and Hamish Bond ending the World Cup series unbeaten for the third season on the trot. They utterly dominated the men's pair race from 500 metres onwards, scything through the French as if they had stopped. Through the remaining 1,500 metres they were untouchable and now head to London unbeaten since the last Olympics.

In contrast, Julia Edward and Louise Ayling took their first World Cup gold, doing it the hard way and rating 38 strikes per minute into a headwind for the entire 2,000 metres. They were never headed, but what was impressive was the way they maintained their high tempo, very difficult in the conditions. Less than a second up at halfway and looking a little vulnerable to the lower rating crews behind them - particularly Denmark's Anne Lolk Thomsen and Juliane Rasmussen - they nevertheless powered on and moved to a half-length lead. They pushed again inside the final quarter and came home a third of a length ahead for an impressive win.

A lead of half a second at 500 metres was another turnaround from Lucerne for Peter Taylor and Storm Uru and gave them the springboard they needed for a superb win - New Zealand's third of the day. They beat Lucerne winners France by a scant couple of feet, but had done enough in the middle 1,000 metres to play a defensive game. They had to push hard when the French attacked very effectively in the final 200 metres, but the win was the Kiwis'. All of the important crews likely to feature in London were present in the final, so the New Zealand win was a valuable form guide.

Nathan Cohen and Joseph Sullivan bounced back to the front after the disappointment of Lucerne with a spectacular second place from the outside lane in the men's double sculls. Their customary slow start left them in sixth at 500 metres, but crucially they were still in touch with the field led by Norwegians Nils Jakob Hoff and Kjetil Borch. Tracking alongside Germans Eric Knittel and Stephan Krueger in second place, the Kiwis moved through to third at 1,500 metres and in the final 750 metres unleashed their blistering push. From clear water down on the Norwegians, they carved through the Germans and came within half a length of the winners at the line. The Kiwis strength has always been in their ability to attack through the second half of the race, but their weakness has always been their start - due in no small part to their relative small size by international double sculling standards. With a much more competitive first 1,000 metres, they proved they will definitely be a force to be reckoned with in London.

Emma Twigg took a solid second place behind Ekaterina Karsten, the 39 year old double Olympic and six time world champion. Both had to chase down the fast starting Fie Udby Erichsen, however. Karsten did this more effectively, taking a length and a half out of Twigg as she moved through into the lead past the Dane. Twigg responded and followed her through, and reduced the deficit to just over a length at the line. In the men's event Marcel Hacker, the 2002 world champion, took his first World Cup win in years and proved he could be a factor in London too. The top three scullers from Lucerne, including Mahé Drysdale were all missing from the final, however.

A quick start by world champions Rebecca Scown and Juliette Haigh was not enough to contain the British World Cup series leaders and Lucerne winners Heather Stanning and Helen Glover, who underrated their Kiwi rivals and moved away consistently throughout the race. At half way they were one and a half boat lengths ahead and despite a New Zealand rally in the final 750 metres, Scown and Haigh were always playing catch up. The Romanian Olympic champions were a closing third, and on their rate of improvement will be fully competitive with the top boats at London.

The women's double scull final included two New Zealand crews, the world bronze medallists Fi Paterson and Anna Reymer and reserves Genevieve Armstrong and Zoe Stevenson. Great Britain and Australia ran way with the race from the very early stages and for New Zealand the interest was in the rivalry between the 2011 bronze medallists and the young pretenders. Armstrong and Stevenson on an outside lane latched onto the eventual third placed Polish girls and it may well have been this that gave them the impetus to take a competitive fourth place. Reymer and Paterson, left in a wilderness after the Aussies and Brits disappeared early on, came home a disappointing fifth, six seconds down on their young team mates.

A lead of half a second at 500 metres was another turnaround from Lucerne for Peter Taylor and Storm Uru and gave them the springboard for a superb win - New Zealand's third of the day. The beat Lucerne winners France by a scan couple of feet, but had done enough in the middle 1,000 metres to play a defensive game. They had to push hard when the French attacked very effectively in the final 200 metres, but the win was the Kiwis'. All of the important crews likely to feature in London were present in the final, so the New Zealand win was a valuable one as a form guide.

The women's quad took sixth, a long way off the pace, but this was their first race weekend together after two injuries, so they can expect to improve and be closer to the outright pace in London. B final appearances for the men's quad and the men's four resulted in second and fourth place finishes respectively for eighth and tenth overall.