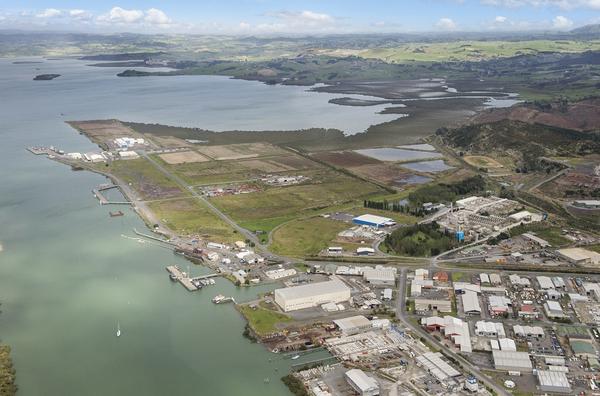 Poised to change the city-scape of Whangarei, the huge Port Nikau subdivision on the city fringe has been placed on the market for sale. CREDIT: Bayleys

One of the biggest single blocks of city-fringe land ever created in New Zealand has been placed on the market for sale.

The 101 hectare block of flat seaside land on the outskirts of Whangarei’s central business district is predominantly bare, although some heavy industry plant and warehousing is interspersed along the L-shaped site.

The massive landholding is contained within 19 unified plots -stretching from the industrial sector of central Whangarei along a strip well out into the city’s harbour.

The area has been traditionally used for port-related activities over a number of decades. However, over recent years many of those industries have relocated to the new deep-water facilities at Marsden Point half-an-hour south of Whangarei.

Now named Port Nikau, the huge subdivision is being sold through an international tender by Bayleys. Company principal David Bayley said the sheer size and scale of the land meant any potential purchaser would have to take a long-term view of developing the site.

“The Port Nikau opportunity would, on size, be one of the biggest such sites ever seen in New Zealand’s history and would rival three of Auckland’s biggest recent single suburban developments - Flat Bush south of the city, the former Hobsonville airbase west of the city, and Albany Basin north of the city,” he said.

The Whangarei land sits some five kilometres from State Highway One and is served directly by rail - with a branch line connecting with the Auckland to Bay of Islands main trunk route.

“Initial work on the site has been conducted by its current owners – with Whangarei District Council agreeing a private plan change which allows a transition from the property’s current industrial zoning, to one which allows a mixed-used development potentially featuring commercial, retail and residential activity,” Mr Bayley explained.

“Under the application, consent was sought to rezone the land from the existing ‘Business 4’ category to a mixed use zone known as Port Nikau Environment. The application was approved last year subject to a master plan for development of the site being lodged with the council.

Mr Bayley said that this zoning would allow future owners full flexibility to overlay their visions for the Port Nikau area, either as a mixed use development or as a quality industrial park.

“The urban design framework initiated by the current owners envisaged a phased, mix-used development which creates a number of ‘zones’ or neighbourhoods,” he said.

Mr Bayley said the various different ‘zones’ proposed under the initial Port Nikau master plan included an urban living zone, a marine industry zone, a town centre zone with retail and food and beverage outlets, and a waterfront living zone for residential dwellings. He said the development opportunities for the land were virtually limitless.

Some of the buildings within the existing Port Nikau landholding are currently leased to industrial tenants on a wide variety of terms.

In addition the three wharves adjacent to the property are used for berthage by a mix of casual recreational users, commercial fishing vessels, and larger maritime craft.

Tenders for the Port Nikau subdivision close on August 4. Mr Bayley said he expected several interested international parties to be visiting the Whangarei region over the coming months to conduct due diligence investigations.