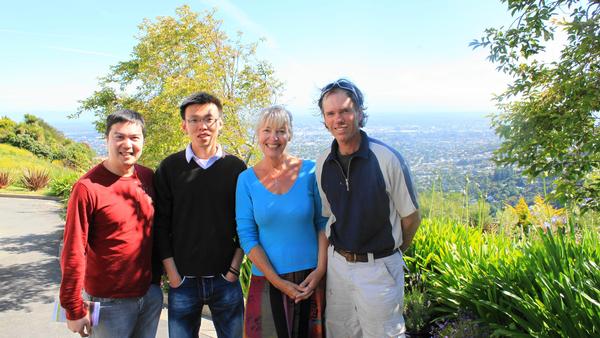 Despite battling through earthquakes and an initial slump of visiting tourists, a Christchurch luxury bed and breakfast has been named in the top 10 places to stay in the South Pacific, including Australia.

Pacific View Paradise, near the top of the Cashmere Hills has come through a remarkable period to be rated by Trip Advisor, the world's largest travel website, among the best rated B and Bs in the South Pacific. The annual awards are based on millions of reviews and opinions from travellers all over the world.

Christchurch and Canterbury tourism has taken a battering since September 4 2010 but the accolades from Trip Advisor are a huge boost to the quake-hit region.

``It's just fantastic news for Canterbury and Christchurch that we have been recognised by the most important people of all - our guests - via Trip Advisor, the world's leading travel guide authority on where to stay,'' Estall-Bone said today.

``Not only have we been also just been given a Trip Advisor Award of Excellence 2012 but we have also won a Trip Advisor Travellers' Choice Award which is great coming from the top authority on the planet for good places to visit as they are based on actual guest experience.

``We expect a huge response from this award which will be great for tourism here. We just have a mark on a wall in a bedroom when a candle fell over in one of the quakes so we are very lucky we are on safe solid ground here,'' she said.

Christchurch has begun recovering from 21 months of earthquakes. But overseas tourists are coming back to Christchurch, still the main gateway to the South Island.

Estall-Bone said she has always wanted to run her own luxury B&B and that dream came true in 2004 when she opened Pacific View Paradise. The bed and breakfast has magnificent uninterrupted breathtaking views of the ocean, the mountains and Christchurch city.

She said her business was going better than she ever imagined and overseas guests just loved the warm hospitality and relaxing environment at her stylish B&B on the Cashmere hills.

``I've had to bring someone in to help me run the B&B. I'm just really lucky to have the most wonderful people come and stay here."

Estall-Bone said she was soon refurbishing her B&B so it would be ready for influx of spring shoulder season tourists.