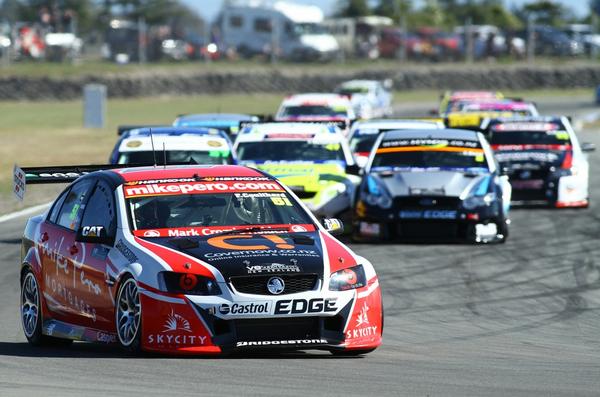 Taupo revved up for Father's Day 400

The forthcoming FATHER'S DAY 400 at Taupo on the 1st and 2nd of September is set to break new ground in New Zealand with a unique qualifying format and back-to-back races on the Sunday, both featuring compulsory driver changes. It will also be V8 SuperTourer's biggest field to date, with 20 cars and 40 drivers scheduled to take part.

Testing on Saturday morning will comprise two one-hour sessions. In the first session either regular driver or the co-driver may drive the car, however, in the second session only the co-driver is permitted out on track. In the afternoon two qualifying sessions - one for each driver - will be run with a short 20 minute break in between.

Each driver must complete a qualifying session and times set by each will denote the team’s starting position for the two races on Sunday. In the races themselves, each driver must start a race before a compulsory driver swap between laps 30 and 40 occurs. Both races will be in excess of 200km and the teams can decide how much of that distance each driver completes within the defined 10 lap pit window. Whilst teams may change wheels, no refuelling is permitted.

"This will be a format that will give the public a chance to see both drivers in action in the car, and one which will put pressure on both drivers to put in a good qualifying lap," explained series Managing Director Mark Petch."It all adds to the excitement and the show and puts an emphasis on teams to make sure their co-drivers are prepared and competitive and not out there just to play a minor role.

"Both drivers must start a race in their respective qualifying position, adding further to the excitement - plus, of course, there is the compulsory driver change, which is always one of the focal points of an endurance race. There are lots of new strategies for the teams and drivers to get their heads around, but one thing is for certain -there is going to be a huge amount of track time for the V8 SuperTourer cars and drivers and what true petrol head Dad and his family wouldn't just love that!"

The event will be one of the most significant on the Taupo calendar as circuit CEO Geoff Langham explained.  “The Father’s Day 400 will have a much broader appeal both in and outside of the Taupo area for families and race fans especially with the unique and exciting new format,” he commented.

“This means people can pick and choose the parts they want to watch. It means fans and families can come and go to enjoy everything a holiday resort such as Taupo has to offer such as day spas, shopping, dining, adventure tourist attractions and hot pools.

“We’re going to have so much going on around the whole event it will be like a festival weekend and with Johnny Mac being based at the track we  expect - and need - plenty of local interest and support. Outside of Taupo, we regularly see enthusiasts and families at the circuit from Tauranga, Hawkes Bay, Hamilton, Wanganui and even Palmerston North and the Father’s Day 400 is an event which will definitely appeal to all of those fans.

“We’ve seen some spectacular racing so far in V8 SuperTourers and that will undoubtedly continue at the beginning of September at Taupo with the added excitement of pit stops, team tactics and driver changes - all of which make the whole race exciting and can change the dynamics in minutes if not seconds."

Early Bird tickets will go on sale on Eventfinder this week with weekend passes starting at just $30. Organisers will also offer a GA upgrade along the bank on the back straight so that fans can watch from their cars. Under 12s, as at all V8 SuperTourer events, will be free.

With the family emphasis, hot lap competitions will run throughout the build-up on local and regional radio and on the V8 SuperTourer Facebook site encouraging families to treat Dad with a day out at the V8s on Father's Day.