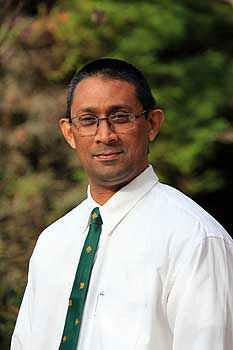 A Massey University chartered professional engineer has overseen a major publication outlining the innovations in information and communications technology being utilised at the London Olympics.

Dr Punchihewa says supplying the ICT requirements for the games is probably the largest project of its kind this century.

“Equipping the city with the infrastructure required was a massive project,” he says. “For example, the data demand for mobile devices, including phones, at venues is huge. Everyone attending probably has a mobile device, which they will want to use, so making sure they all can is vital.”

The Institute of Engineering and Technology produced the publication as part of a knowledge transfer initiative, designed to give businesses and academia the chance to connect with and understand major infrastructure projects for such critical events.

The publication contains papers on every aspect of the project; systems integration, super-fast fibre, mobile data, web development and sensing for athletic training.

Dr Punchihewa worked with colleagues in the United Kingdom to edit the publication and travelled to London to meet with the editorial team.

“I was honoured to be a part of the editorial team and to represent Massey University, which places such a great emphasis on sport science and technology,” he says.