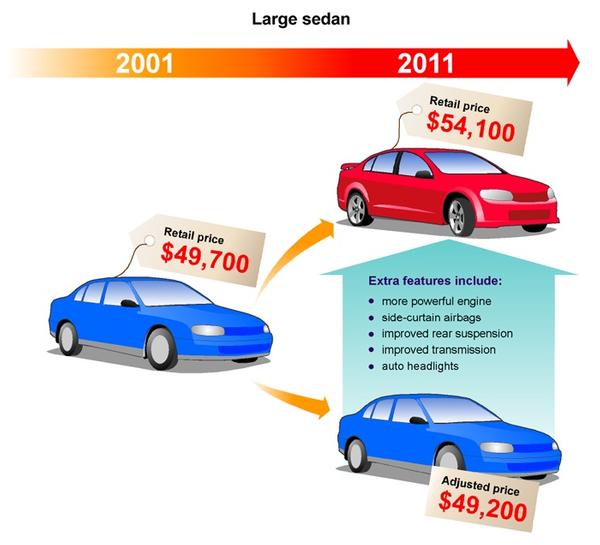 Statistics prove it – new cars are better value than ever

While the motor industry has long promoted the idea that cars represent increasingly good value, proof that it is an actual fact is now available courtesy of Statistics New Zealand.

In a recent report on the price movement of new cars between 2001 and 2011, Statistics New Zealand data shows that in real terms, the price of new cars actually decreased by around 1.5 percent on average during that period.

Commenting, MTA spokesperson Ian Stronach said “This data doesn’t really come as a surprise to anyone familiar with the motor industry, but it’s good to get some statistical evidence. Over recent years cars have steadily offered more features, room, power and convenience to buyers, usually without increasing fuel or real purchasing costs. Smarter manufacturing methods, currency shifts and tighter margins have meant a better deal for buyers.”

In its survey, it looks at the movements in car prices as measured by the consumers price index (CPI). According to Statistics New Zealand, any movements should reflect changes in price, but not the effect of changes in the features of cars. To remove the effects of any changes in quality, Statistics New Zealand ‘quality adjusts’ the retail prices, based on the value of the changed features to consumers – that is they deduct the value of any additional features or improvements over the original car.

This is the same process that car manufacturers use when comparing the ‘actual price’ of one vehicle to another. Even though the car industry tends to use the term ‘specification adjustment’ the process is effectively the same. It allows for a more accurate picture of the changes in price without being distorted by the effects of increased features.

Not surprisingly, the difference between the quality adjusted prices and retail prices tends to increase over time, because of new features being added when new models are introduced. Over recent years this has tended to include things like airbags, anti-lock brakes, stability control, more powerful engines, climate control air conditioning and on-board navigation and entertainment equipment.

In the case of new cars though, during the period surveyed, the retail prices of the cars tracked in the CPI increased 19.1 percent, but the ‘quality adjusted’ prices actually went down by 1.5 percent.

The survey looked more closely at two specific cars – a large sedan and a small hatchback.

The growth in new car sales so far this year indicates buyers have been able to recognise this value for themselves. Cars today are more convenient, comfortable, practical and better built than ever. They rarely fail and provide great performance, plus they are more environmentally compatible than they’ve ever been. This survey supports industry’s view, ‘there’s never been a better time to buy a new car’.