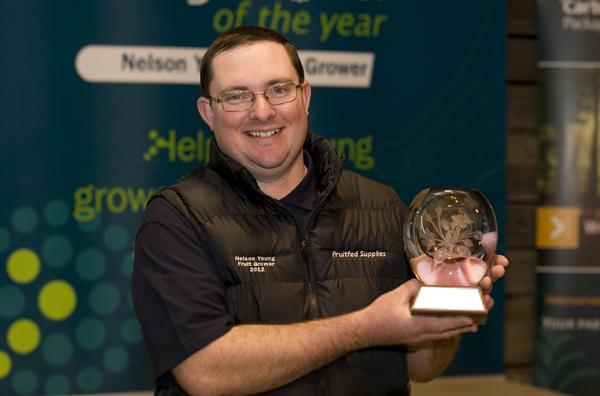 Jos Bell has been named the Nelson Young Fruit Grower 2012, beating off tough competition from eight other finalists from the Waimea Plains, Motueka and Riwaka.

The competition was held at Hoddy’s Orchard Packhouse on June 27 and was a day-long event involving a series of nine tasks, all testing essential skills a successful grower needs to run a business, including assembling an irrigation system, pest identification and administering first aid.

Jos Bell, (27), works at Hoddy’s Orchard as a technical manager and wins $1,500 cash and the Energie Fruit Foundation trophy, in addition to an all expenses paid trip to Hawke’s Bay to view other orchard systems.

Jos said the competition was challenging but very rewarding.

“It was an exciting and challenging day for me but I really enjoyed meeting the other contestants and getting to push my skills to the limit. It was a total surprise when they announced me as the winner, but I’m really looking forward to what the final has to bring next month.”

Last year’s regional winner Kevin Withington, who also took the national Young Fruit Grower of the Year 2011 title, says he was encouraged to see the high standard of this year’s contestants and believes the Nelson young growers are a testament to the region’s dedicated horticulture community.

“This is our biggest Young Grower competition yet, these nine young men and women showed talent, skill and passion throughout the competition. I look forward to seeing how Jos does in the final in Auckland.”

Jos will go on to compete for the national title at the Young Grower of the year competition being held in Auckland, at the Horticulture New Zealand Conference in July.