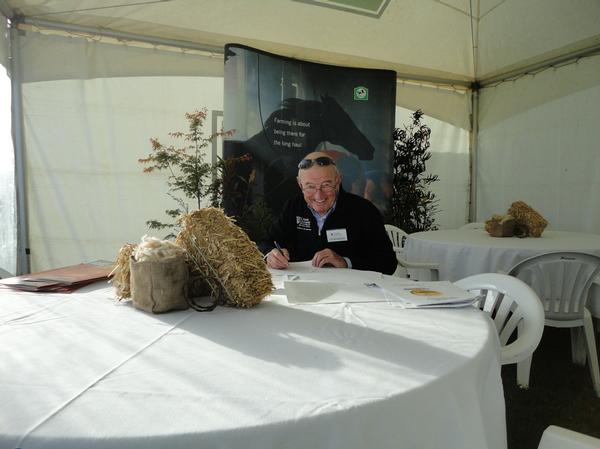 A career in education and working with young people provided an excellent foundation for Dr Warwick Scott’s involvement with The National Bank Young Farmer Contest.

After 12 years of close association with the event, Dr Scott has recently been appointed as the first Contest Patron.

“I am deeply honoured,” he says. “It is a privilege to work with this amazing event which, year after year, showcases the on-going talent New Zealand has among its young famers, both men and women.”

“Let me assure everyone, I love the connection with the Contest and intend to be very much a ‘working patron’ ” says Dr Scott.

Contest Chairperson Bevan Proffit says “we are thrilled to have Warwick on board as our Contest Patron.  His involvement with the Contest in particular his contribution with the question setting has been invaluable. His commitment to the Contest has been outstanding having only missed one Regional Final in 12 years. With Warwick’s passion for Lincoln University and the agricultural industry we are very fortunate for his association with our event.”

Christchurch born and bred, an old pupil of Christ’s College, and an alumnus of Lincoln University where he completed a First Class Honours degree in Agricultural Science and a PhD in Agronomy, Dr Scott was a plant scientist at Lincoln University for 39 years, retiring in 2009 as a Senior Lecturer.

He began his association with the Young Farmer Contest at the Regional Final in Blenheim in 2000, the year Tasman’s Andrew Finch won the Grand Final.

Warwick’s involvement followed a suggestion by Lincoln University colleague Neil Gow, who was standing down after many years of sterling service to the event.  “I began by helping to set questions for the agribusiness section, then later I became involved with the photo identification round.”

In 2006 Dr Scott became one of the adjudicators for the Grand Final and since then he has become more and more involved in helping to set the questions for both the Regional Finals and the Grand Final.

“This is not as easy as it may seem; the questions and answers have to be spot on, there can be no room for ambiguity as everything is very intense because the final rounds are live on television.

Dr Scott believes that television coverage is vital for profiling agriculture to urban audiences. “It is absolutely essential that urban New Zealand understands and appreciates the depth of talent we have in our agricultural sector and its importance to the New Zealand economy.”

He believes interest in the Contest is going up and says that participation is certainly expanding as more women Contestants are now coming forward. “The physical nature of certain events organised at the moment might disadvantage some of the women, so that’s something that will need to be addressed.”

“It is also important to remember that you don’t have to be a farmer to enter. In recent years we have had Contest participants who have been vets, accountants and lawyers taking part.”

From his perspective the best thing about the Contest is the “great group of people, both organisers and Contestants, who roll up their sleeves and deliver the event to the public year after year.”

He and wife Ailsa, who ably supports him in the work with the Contest, enjoy the interaction with the teams of organisers behind the event. “There’s no room for woofters or show ponies, they all just get on with it,” he says.

In his career as an academic at Lincoln University Dr Scott was one of the most popular lecturers on the campus. He taught plant science and brought life and laughter to his teaching about subjects that form the basis of New Zealand’s pastoral farming industry. He was one of the first two recipients of the Lincoln University Awards for Excellence in Teaching when they were introduced in 1990. The citation described him as an “outstanding teacher” showing “extraordinary performance” at all levels. He won a second award for his teaching in the University’s Blues, Golds and Green Awards of 2008, when students voted him Top Teacher in the Faculty of Agriculture and Life Sciences.

He has also always been a very popular extension teacher, taking his expertise out to farmers in the field, particularly in relation to brassicas. This is work which still occupies him.

As a researcher Dr Scott conducted important work on subterranean clover, cereals and forage crops, and he is a past holder of a prestigious Nuffield Fellowship, which took him overseas to the Plant Breeding Institute at Cambridge for a year.

He has long been a vocal advocate for raising the number of agricultural science graduates in New Zealand to meet the needs of the country’s agrarian economy and associated industries.