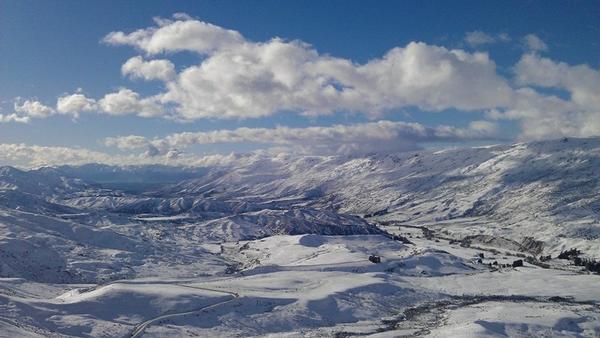 Lake Wanaka, recently named amongst the top 25 ski resort towns in the world by National Geographic Magazine, is poised to live up to its reputation.  Mother Nature has provided a perfect start to the 2012 winter season, delivering over 50 centimetres of fresh powder to the region this week.

“The timing couldn’t have been better for those travelling to Wanaka for the school holidays,” said James Helmore, general manager of Lake Wanaka Tourism.  “All four ski areas will be open by Friday (29 June) and the new snow will allow the mountains to put plenty of terrain on offer.”

Seen as one of the world’s premier adventure towns, Lake Wanaka gets the most snow in New Zealand, with over 4metres (160in) in an average season.

Its four mountain resorts combine to offer a wide variety of skiing, snowboarding and cross country terrain.  Home to many of New Zealand’s elite snow sports athletes; Wanaka offers everything from perfectly groomed beginner slopes to powdery steep slopes that promise to get the adrenaline pumping.  Those looking for time in the air can take advantage of world-class park and pipe facilities and, on any given day, will likely be skiing or riding alongside some of the world’s best.  Wanaka is also home to New Zealand’s only cross country ski area, Snow Farm which provides a truly unique experience for those looking to improve their fitness while enjoying the peace and quiet of the winter outdoors.

Visitors to Lake Wanaka can also take advantage of the areas new OnePassNZ, which provides unlimited freedom to ski and ride at eight of the South Islands favourite mountain resorts, including all four Wanaka resorts (Cardrona, Treble Cone, Snow Park and Snow Farm).

“What makes this pass unique is that it allows visitors freedom to ski any of the eight mountains as they choose,” says Nigel Kerr, Treble Cone marketing manager.  “Beyond that, the pass can also be used to rent gear, take lessons, eat in local restaurants and experience an array of other activities like skydiving, jet boating, spas, vineyards and more.”

“It’s magical when the peaks surrounding Wanaka are covered in white,” said Helmore.  “The town is buzzing and we’ve once again become a winter wonderland.”

For more on Wanaka: www.skilakewanaka.com