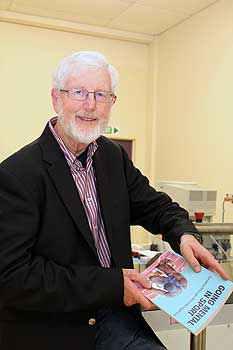 Psychologist gets athletes ahead at the Games

Athletes can spend years preparing their bodies physically for the Olympics, but to become a champion the mind also needs to be prepared.

Massey’s Professor of Sport Psychology Gary Hermansson will be helping New Zealand’s Olympic team get in the right headspace in London as the team’s sport psychologist.

He says his job is to help set the psychological climate for the team, making sure the athletes feel both supported and challenged, as well as dealing with any crisis that may come up. “The Olympics is a pretty intense environment, and in many ways it’s whoever turns up mentally on the day is going to be the one that succeeds.”

“At pinnacle events like Olympics or World Cup Rugby or World Cup Soccer or whatever, is where the psychological side, the mental side, comes into play much more than at everyday competitions.”

He said that the Olympic environment was suited to some athletes more than others. “For some athletes you turn up do your thing and then it’s all over, all the years you’ve been preparing, it all comes down to a very narrow timeframe. That adds its pressures as well.”

Professor Hermansson started at Massey in 1974 as a lecturer in education and later became the course director for the Counsellor Education Programme. In 2001 he became Professor of Counsellor Education and in 2002 was made Head of the Department of Health and Human Development in the School of Education, before retiring from the University in 2005 to move into sport psychology fulltime. He re-joined Massey on a part-time basis in 2012 as a Professor of Sport Psychology based in the School of Sport and Exercise. He also provides sport psychology services to Massey’s Academy of Sport.

He says a lot more is now understood about sport psychology than when he first started working in the field. “Over the years, we’ve become better at taking some of the reasonably complex theories and principles and putting them into a context we can understand.”

His latest book, Going Mental in Sport: Excelling Through Mind-Management, sought to do just that. “That [the book] is actually trying to turn it into a form which is usable, and athletes and coaches can make use of it.”

Among the Olympics team he’ll be joining are dozens of Massey Students and alumni. You can follow its progress, read insight and commentary from the University’s academic staff, and watch video content at Massey’s dedicated Olympics page.