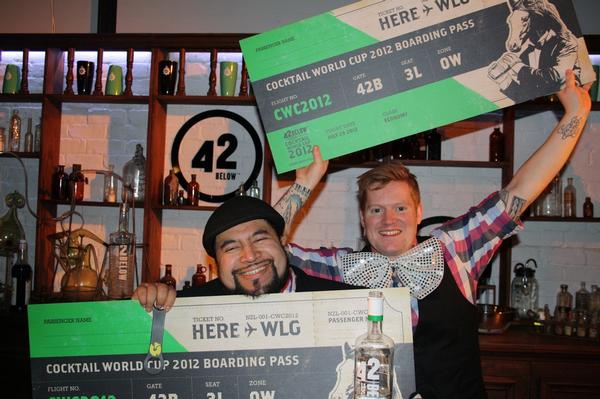 The first two bartenders to take part in the New Zealand final for the 2012 42BELOW Cocktail World Cup have been found. They are Charles Gillet from 1885 with ‘42nd Way To a Man’s Heart’ and Barney Toy from Suite Bar with his drink, ‘Reaching New Heights’. Six Auckland mixologists went head to head in the first regional heat, Barney and Charles are now in the running to be part of the team to represent New Zealand at the iconic international cocktail competition.

After a record number of entries up and down the country, the regional heats kicked off last night at Britomart’s Nathan Club. The city’s best bartenders battled it out in a spectacular and closely contested competition with an enthusiastic and vocal hospitality crowd in support. This years’ theme is ‘Lab Experiment’ and mixologists were encouraged to push the boundaries of great drinks making with a cocktail concoction never seen before.  Barney’s drink incorporated the use of a soda siphon to aerate his drink, while Charles used ‘vanilla cigar smoke’ to infuse his drink and served it with a cigar and dark chocolate garnish.

Judges were blown away at the level of innovation and attention to detail in the drinks.  “It's great to see the thriving creativity at the top-end of New Zealand bartenders, with the use of sophisticated ingredients and entertaining techniques, as well as original themes behind the drinks,” said Cuisine magazine editor, Sarah Nicholson. Head judge and member of Team New Zealand 2010, James Goggin said some of the competitors were separated by just one point, but they were unanimous in who to put forward to the national final, “ Barney put on a great show, he is an excellent performer, while Charles drink was almost faultless, perfectly balanced and with a great choice of glassware (a silver goblet).”

The 42BELOW Cocktail World Cup traveling convoy now heads south to Tauranga for a regional heat on Tuesday. It is the beginning of an exhaustive search by 42BELOW to uncover New Zealand’s top three bartenders. The talented trio will try to right the wrongs of the past and make history as the first New Zealand team to win the world’s most extreme and unique mixology competition.

The regional heats promise to an event not to be missed, entry is free and the first 42 people through the door will receive two delicious 42BELOW cocktails. There will also be entertainment, drinks specials and spot prizes on the night.


The New Zealand final will be held on Sunday 29th July at The Front Room in Wellington. The winning bartenders will become ‘Team New Zealand’ and take part in the 42BELOW Cocktail World Cup- ‘Lab Experiment’ kicking off in Queenstown on September 3rd.

You must be over 18 years to attend any of the 42BELOW regional events, for more details visit the 42BELOW Cocktail World Cup Facebook page.

Shaken, strained and smoked then served in a miniature rugby world cup

Add pineapple to a boston and muddle. Add all other ingredients to the boston ice and hard shake. Double strain into a soda siphon and iced snifter. Garnish with pineapple.