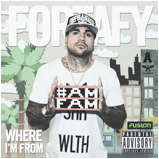 Dawn Raid Entertainment is pleased to announce the signing of Hip Hop artist FORTAFY and producer A.T.P of Beatkamp Muzik to an exclusivealbum deal with Frequency Media Group & Universal Records.

After building up a huge online following for his self-produced music videos, generating over 2 million views online, the NZ born/ Brisbane-based FORTAFY has cultivated a strong and dedicated fan base through his the talent and uncompromising work ethic.

"We're excited because FORTAFY’S done this all by himself,” comments Dawn Raid’s Brotha D. “He's generated his own movement and built a fan base which is bigger than some more established acts in the field, in a small amount of time. That has to be recognized and his music given a chance to go even further.”

A.T.P (Azthatrakprezz, founder and CEO of Beatkamp Muzik) achieved No.1 success with producing Savage's breakout hit ‘Swing’, which launched an assault on the US charts that’s been unmatched in down-under Hip Hop.