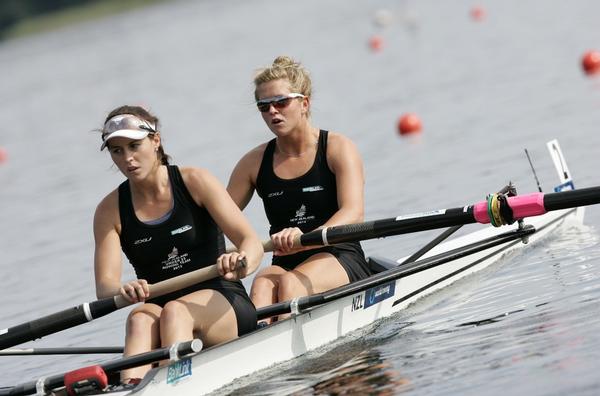 Kelsey Bevan (left) and Kayla Pratt dominating their heat of the women's pairs at the Under 23 World Rowing Championships at Trakai, Lithuania. CREDIT: Rowing New Zealand

New Zealand crews made a good start to the Under-23 World Rowing Championships in Trakai, Lithuania last night - with the women's pair of Kayla Pratt and Kelsey Bevan blitzing their race to qualify for the A final and the men's coxed four coming a close second to also qualify for the final.

Pratt and Bevan won by a colossal 18 seconds ahead of Norway, the USA, Latvia and Hungary and in a rare demonstration of dominance at international level, had secured the race with a lead of almost six seconds at the first 500 metre marker. They now head to the A final where it looks like it will be a straight fight for gold with the British pair - who also won comfortably in a slightly quicker time.

The men's coxed four also made it directly to the A final after an epic battle for the heat win with the USA. The crews were overlapping throughout with the Kiwis leading through each of the 500m, 1000m and 1500 metre markers and under pressure from another fast four from France. Only in the final sprint to the line did the USA get their noses ahead. Second was good enough for an A final place, however.

The men's coxless four, the women's quadruple scull and the women's four all finished outside of the automatic A final qualification places, and will head to the repechages to try and progress. There are two more New Zealand boats in action in preliminary heats this evening, the lightweight four and the men's double scull.