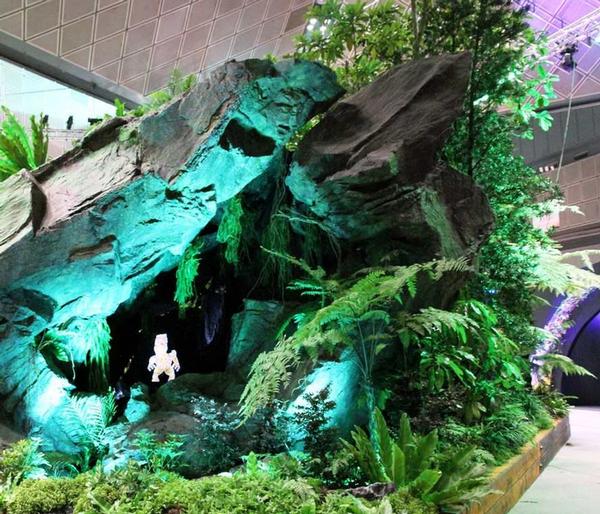 The pair won gold last week at the Singapore Garden Festival with their first international garden (pictured), competing against 15 of the world’s top garden designers.

“Working with Sir Richard Taylor and the talented Oscar-winning Weta Workshop team, Danny and Andy have designed a garden that is mind-blowing.

“While the garden has an earthquake-theme based on Maori mythology, it also focuses on the rebuild of Christchurch – it will be a real show-stopper.”

Danny and Andy’s garden was inspired by the Maori myth of Rūaumoko, the God of Earthquakes, with the Weta Workshop team creating the underworld in which Rūaumoko lives.

“Working with the Weta team was an absolute privilege,” says Andy. “What they achieved was beyond our wildest dreams.”

The centrepiece of the exhibit is a 10m x 4.5m high cave that has the ability to shake and move. “What we hope is that the garden gave the 400,000 visitors to the Singapore Garden Festival an insight into the effect of the earthquakes in Christchurch and a sense of the enthusiasm for the rebuild and future of the city.”

Climatic conditions and cost meant they could not ship New Zealand native plants to Singapore for the exhibit, instead choosing to use local plant material to represent New Zealand’s native bush.

Danny says the lighting by Andrew Frazer from Wellington-based Stellascapes and bird calls recorded in the Port Hills added the final touches to the garden.

The duo have twice competed at Ellerslie, winning Gold, the Supreme Award for Design Excellence, Silver and a Lighting Award.

Danny says they are excited about returning to next year’s Ellerslie International Flower Show where they hope to again win Gold and inspire local audiences.

“Our focus is to help out with the planning and design of the Christchurch rebuild, although if another opportunity to compete internationally did present itself, we would look to be involved,” they say.

The 2013 Ellerslie International Flower Show will be held in North Hagley Park from 6 to 10 March.