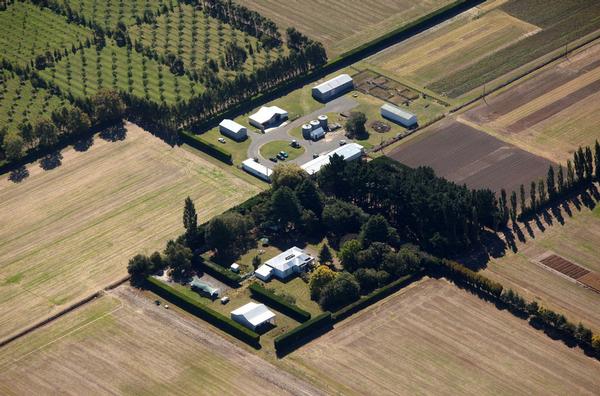 This highly-productive seed production farm in Springston, Canterbury, is on the market for sale. CREDIT: Bayleys

Global seed research and production farm up for sale

A highly productive ‘showcase’ farm which has grown trail seed crops for global export has been place on the market for sale.

Osterley Farm the near the Canterbury township of Springston is a 26.243 hectare property which has supplying seed to international agri’ merchants AB Annand & Co since 1998. In addition to seeds, the property has also served as a demonstration ground for Annand – which regularly hosted international visitors to the site.

AB Annand & Co Ltd was founded in New Zealand some 95 years ago – with the firm’s seed production growing a number of varieties and hybrids in Canterbury’s temperate climate. Osterley Farm operates in conjunction with Annand’s sister farm in Oregon, USA, allowing for seeds to be grown for supply all-year-round. The Springston location has made use of the world-class research facilities and laboratories at nearby Lincoln.

Among the seed crops which have been grown at Osterley are broccoli, cabbage, coriander, kale, mustard, peas, radishes, spinach, beet, carrot, cauliflower, and turnip.

However, after some 14-years of running the intensive cropping operation, Annand & Co no longer requires the trial farm. The property is being now marketed for sale by Bayleys Canterbury – with offers being accepted until August 2.

Bayleys Canterbury salesperson Richard Innes said that as would be expected from a ‘showpiece’ production farm, Osterley was “immaculate”. The flat landscaped farm has a rateable value of $1.405million.

“The crop rotation and crop management programmes at Osterley, combined with an extensive fertilisation programme, have ensured not only the soil integrity, but also the constant nutrient replenishment allowing for cropping year after year,” Mr Innes said.

“Osterley has a comprehensive fertiliser history. Most recently the paddocks have been sown in barley, with a small area for trials while– many of which were strictly controlled with crop netting to avoid any chance of wind-borne cross-fertilisation.

“The farm’s paddocks are subdivided by good post and wire fencing. Irrigation of the property comes through two water consents from two of the four wells on the property.”

Mr Innes said the farm’s 257 square metre homestead had been converted into AB Annand & Co’s New Zealand office, but could easily be converted back into a residential dwelling. The dwelling has kitchen fittings, as well as a bathroom, and several rooms serving as offices or meeting rooms.

Additionally, the farm had a 56 square metre two-bedroom guest cottage with its own bathroom, laundry, kitchen and toilet.

The property is zoned Rural Inner Plains – allowing for subdivision down to four hectare plots. Mr Innes said the trial farm could continue in its current research format – with the layout and fertile composition of the Templeton soil type opening up any number of possibilities for future development on an ongoing intensive scale. Or a new owner could convert to more traditional bulk cropping.

“The lay-out of Osterley Farm is for maximum efficiency, with the modern and well maintained support buildings set up to reflect a world-class business – a showcase of New Zealand’s position at the forefront of agri’-technology sector.” Mr Innes said.