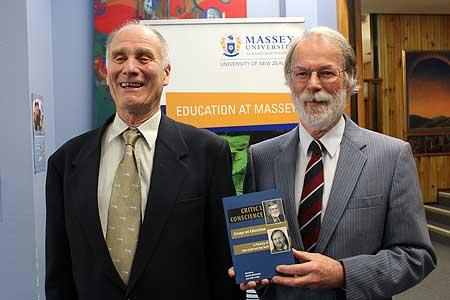 Critic and Conscience – Essays on Education is a tribute to the late John Codd and Roy Nash for the contributions they made to education scholarship and policy.

Professor Chapman said the book honours the great intellectual achievements of Roy Nash and John Codd, who until their deaths in 2006 and 2007, were leading education academics nationally and internationally. “I very much admired the depth and range of their scholarship, which had a very significant impact on educational theory, policy and practice,” he said.

Professor Chapman worked with both men over three decades at Massey and said the idea of the book came from a desire to celebrate the significant contributions they made. “John was known for his philosophical work in education policy, and Roy for his sociological scholarship on explaining inequalities in educational achievement.”

The book’s essays, written by contributors, are based on and move beyond their ideas, which remain relevant in education debates today.

“The volume illustrates that John and Roy left an indelible mark on the education landscape, and signposted the way for those who might follow in their footsteps. They were, truly, two of the finest examples of being the ‘critic and conscience of society’, whose work was always anchored in peer-reviewed research and scholarship” Professor Chapman said.

The book’s launch was celebrated at Massey’s College of Education on Wednesday. Professor Nash’s book Explaining Inequalities in School Achievement, completed after his death by  Professor Hugh Lauder, was also recognised as a lasting testament to his scholarship.