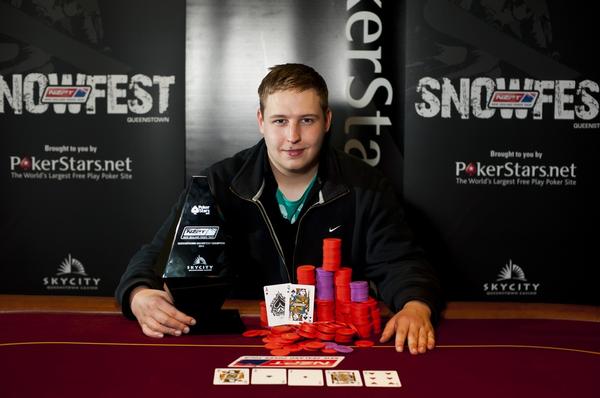 SKYCITY Queenstown Casino is playing host to poker players from around the world for the fourth season of the Pokerstars.net NZPT Queenstown – SKYCITY Snowfest from 24 – 29 July.

With the field capped at 200 players, including some of the top poker players from throughout Australasia and the world, competition will be fierce. Players will have to pull out all the stops to take away a slice of the maximum $540,000NZD* prize pool and to be named the Pokerstars.net NZPT Queenstown – SKYCITY Snowfest Champion for 2012.

Pokerstars.net NZPT Commissioner Danny McDonagh is thrilled with the quality of players and is looking forward to the upcoming tournament.

“This is the fourth year of the NZPT Queenstown tournament and it is always a pleasure to come to this beautiful part of the world. We are expecting to set records this year for attendance but this event is about more than just a great poker tournament. Queenstown is a fantastic place for poker players young and old. Families have a great time with so much outdoor activity while the younger players enjoy the amazing night-life Queenstown has to offer,” Mr McDonagh said.

As well as exciting poker action on the felts, the tournament is great for Queenstown tourism with players, friends and family members expected to take part in a number of actitivies across the week.

New activities this year include Poker in the Snow, a mock poker tournament up Coronet Peak hosted by NZSki on Wednesday 25 July featuring Team PokerStars.net players Bryan Huang and Rohit Bhasis, and the inaugural Pokerstars.net Frisbee Golf Tournament at the Queenstown Gardens on 26 July.

SKYCITY Queenstown Casino’s General Manager, Michelle Baillie suggests that the benefits to the region are greater than some may think.

“We are delighted to be working with the team from Pokerstars.net again this year. The event is good for the local economy and is a great way to show-case Queenstown to millions of poker fans all over the world through video blogs and coverage from international poker news websites,” Ms Baillie said.

Entries to the Pokerstars.net NZPT Queenstown – SKYCITY Snowfest are still available but interested parties are encouraged to get in quick. To register for the $3,000 buy-in main event or to see details on the tournament schedule including qualifying tournaments on Monday 23 July, see www.skycityqueenstown.co.nz for more details. You must be 20 years or older to enter SKYCITY Queenstown Casino. Game Responsibly.