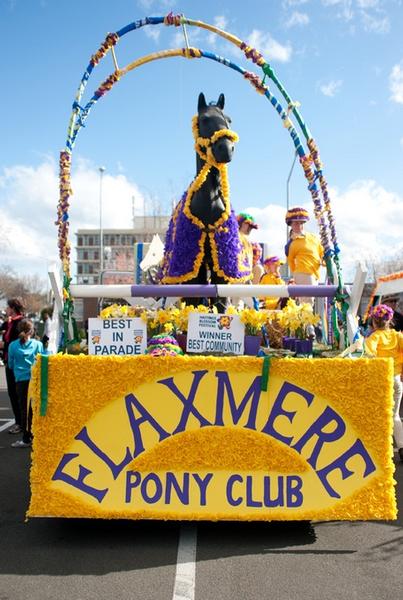 Hastings CBD will come alive on Saturday, September 15th as the annual Blossom Parade takes to the streets of the central city.

This iconic event has been held for more than 50 years and celebrates the arrival of spring in the Bay.

It’s just eight weeks until the parade but there is still time to become part of the fun and entertainment. Some groups have already begun constructing large floats and others are building smaller ones, but many of the entries are simply walking groups with common or shared interests.

People of Scottish heritage may consider wearing their kilts in the parade, schools, sports groups and camera clubs can show pride in what they do, and those who spend their weekends training pets, learning musical instruments, or mixing with modellers, skaters and tango dancers could also be a part of this great annual event. Individuals can put on costumes and become part of the parade or you may like to help out behind the scenes as a volunteer.

Creative Hastings General Manager Malcolm Calder says “The Hastings Blossom Parade is a joyous family celebration of WHO we are, WHERE we live and WHAT we do for work and leisure. Last year’s parade was a great success, with the floats and other entries extremely varied, noisy and colourful. This year’s parade promises to be even better.”

Malcolm Calder says “Each year the parade features participants from the many different cultural groups which make up the wider Hastings community. These groups bring an amazing variety of music, dance and colour to the parade which adds to the excitement of the event.”

“There is no fee to enter the parade, all you need is enthusiasm, and if you have never taken part, why not give it a go this year,” Mr Calder says.

So don’t leave it till the last minute. Register your interest in participating now by getting in touch with the Parade Director, Lyn Mackie on 878 9447 or email artcentre@clear.net.nz.