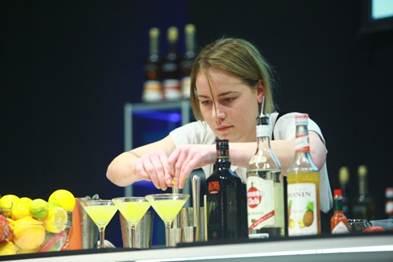 Rattle. Shake. Pour. The nation’s top bartenders are gearing up to rattle the ice, shake up their best cocktails and pour on the showmanship at Auckland’s Restaurant & Bar Show this month.

New Zealanders have voted for their top shakers and now the best of the behind-the-bar artisans are set to strut their stuff in a bid to win the R&B Bar Masters – the New Zealand leg of the international Monin Cup competition.

Cocktail contenders came from all corners of the country with more than 100 bartenders nominated and around 2,500 votes counted in the competition, which aims to discover the best up and coming bar talent around the country.

Finalists take the stage for the competition at the Restaurant & Bar Show in mid-August and the winner flies to Kuala Lumpur to compete in the global semi-final. From there, the top bartenders get a chance to shake and stir it on top of the Eiffel Tower in Paris.

Head judge this year is international cocktail connoisseur Tomas Vikario, who will work with a panel of respected local judges including Frankie Walker of Lion Nathan and Calem Chadwick of Beam.

Nowadays bartenders are embracing science to prepare and perfect drinks including using foam, liquid, gels, mists and heat in their creations. Those attending the Bar Masters competition at the Restaurant & Bar Show on Sunday August 19 (2pm) & 20 (3pm) are guaranteed to see some spectacular mixes and moves.

The local competition is sponsored by Monin and is one leg of a global competition which sees the world’s leading cocktail shakers competing for the coveted MONIN Cup 2012.

Registration to the show is free and is open now for everyone in the hospitality industry via the show website www.randbshow.co.nz. The show features seminars, panel discussions master classes and the NZ Culinary Fare. Also join us on Facebook http://www.facebook.com/randbshow or follow us on twitter @BEFestivals with the trend #R&BShow