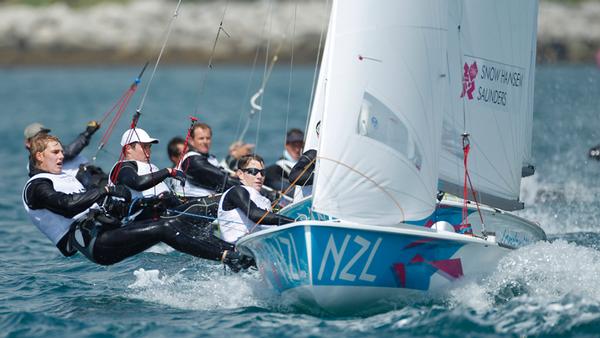 It was another day of achievement on the water for the NZ Olympic sailors, with JP Tobin finishing his first Olympics, the 470 Men qualifying for Thursday’s final medal race, and the 470 Women picking up two race victories.

Boardsailor JP Tobin took his turn to sail in front of the New Zealand supporters on the Nothe medal race course, and he finished eighth across the finish line of what was likely to have been the last ever Olympic windsurfing race. He was left seventh overall, but sounded interested in exploring the future of Olympic boardsailing.

“Looking forward, there’s a potential for Rio. There’s maybe an option there in the Windsurfing or Kiteboarding” he said.

Paul Snow Hansen and Jason Saunders didn’t have their best day on the water, but it was enough to earn their spot for Thursday’s 470 men’s double point medal race.

“It was a pretty tricky day for us on the water” Paul said. “It was a different course and we had a lot more laps which condensed the fleet hugely”

“We still came away with a chance of a medal, so going in to the medal race we have a lot to gain and just need to sail the best we can and see what happens.”

The shining stars of the day were Jo Aleh and Polly Powrie – the girls won both of their races in the Women’s 470 division.

“It was a good day; another solid one but we’ve got another two races yet before the medal race. We’ve just got to keep ticking along” said crew Polly Powrie after racing.

Points are very close in the women’s 470 fleet, and even with these good results they do not have a firm grip on any final positions.

“Still a lot can change and just got to keep doing what we do” commented Jo Aleh.

Tomorrow brings the final two opening series races for Jo and Polly, and the 49er medal race for Peter Burling and Blair Tuke.  Paul Snow Hansen and Jason Saunders will enjoy a rest day tomorrow before their medal race on Thursday.

Full Results can be found online the Official Event Website