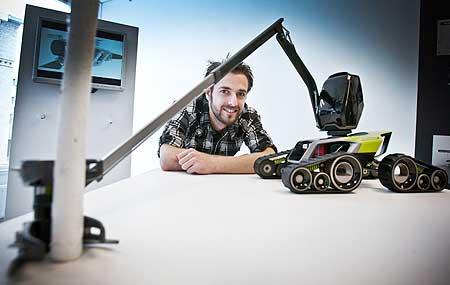 Tree harvester design a cut above

Industrial design graduate Nick Ross from Wellington has won the coveted James Dyson Award for a tree-harvesting device with the potential to revolutionise the forestry sector.

It is the sixth consecutive year in which a student or graduate from the College of Creative Arts has won the award and judges praised efforts by Mr Ross, who is currently in Sweden, to engage with the international forestry community in devising his design.

The award, announced at a function in Auckland, recognises emerging product designers whose ideas best demonstrate innovative and inspiring solutions to everyday problems.

The Axolotyl, named after the endangered Mexican walking fish, is designed to cut and separate tree trunks, branches and needles on site, and return its nutrients to the ground for natural regeneration. In doing so it bypasses current tree harvesting methods that require return visits to the forest by heavy trucks causing soil compaction and damage to surrounding trees.

“Over the past years I have noticed the forests decreasing and I started my project questioning why this was happening,” Mr Ross says.

“I absorbed myself with forestry specialists and Scandinavian forestry equipment manufacturers and their users to uncover their expertise in this field.” Once he had identified the biggest problem within the sector he says he set out to solve it.

At present Mr Ross has a prototype of his design and is in discussions with the Scandinavian forestry industry to commercialise it.

Head judge David Lovegrove from the Designers’ Institute of New Zealand praised the research that went into the design, which he called “the best research project we’ve seen from New Zealand entries,” and its environmental awareness too.

“He didn’t set out to design a tree harvester,” Mr Lovegrove says. “He approached the design with the simple question, how do you grow trees better? So we were encouraged to see sustainability was a core motivation in the product’s development, and during the design process.”

Fellow Massey industrial design graduate Nick Marks, who designed a waterproof ear device for the hearing impaired, and Victoria University graduate James McNab who designed a self inflating life jacket for safer free diving, were the other finalists.

The Axolotyl will compete against designs from 18 other participating countries for the international James Dyson Award to be announced in November.

Mr Ross’ prize package includes a trip to the UK courtesy of the British Council New Zealand. He will also get to visit the London office of product manufacturer Dyson and meet with member of the UK design community.