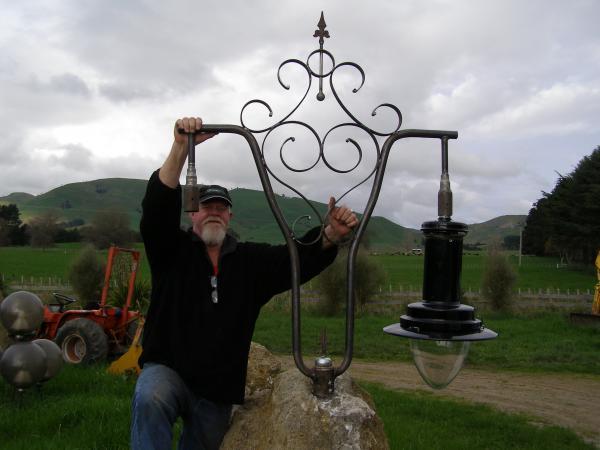 The varied role of Wairarapa's councillor

Making a century-old replica of a gas-lamp post fitting is one of the more unusual public duties for Greater Wellington’s Wairarapa councillor Gary McPhee.

Cr McPhee spent a couple of days in his shed bending and shaping 15kg of steel to match an old photograph of the lamp posts that used to adorn the main street of Carterton early last century.

The fitting will take two electric lights and sit on top of a restored lamp post outside the new Carterton Events Centre.

Cr McPhee was aware that John Gordon of the Keep Carterton Beautiful group had this project planned and offered his services free of charge.

“The community pays my wages so I’m happy to do these things.”

He has forty years experience as a fitter/turner/welder and has built motorbikes from scratch and any number of other engineering projects.

He says it wasn’t a particularly hard job, just hard to make it look old.

“It made a nice change from the meetings I have been at lately. It’s good to have a bit of variety.”

Some of Cr McPhee’s other varying public duties include being a wedding celebrant and offering the services of his Harley Davidson sidecar-hearse for deceased motorcycle enthusiasts who want a final bike ride to their resting place.