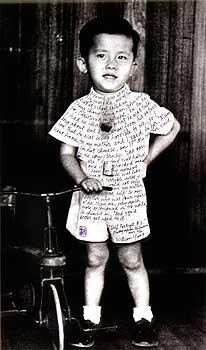 One of Australia’s best-loved photographers will lead off a busy weekend in mid-September for Wellingtonians who enjoy documentary photography.

On Saturday September 15, a public symposium will hear from other documentary photographers and historians, including the UK-based Norwegian artist Heidi Morstang whose recent work has focused on Norwegian volunteers in the Nazi SS.

William Yang’s work is best described as photojournalism of his own life. It is, in turn, a social history of the people, places and events that surround him. Mr Yang is renowned for his extensive photographic archive of the Sydney gay community in the 1970s and 1980s and his books and performances in which he weaves together narratives about his Chinese heritage, his identity as a mixed race gay Australian and the impact of AIDS on the gay community of Sydney. His work often involves words, sometimes written on the photographs or as part of a spoken slideshow performance. He has completed eleven full-length theatre works, many of which have toured the world.

In William Yang - The Story Only I Can Tell: A Talk with Images, Mr Yang will talk about his life and the evolution of his documentary photography into his unique story-telling style.

The one-day public symposium, Making Visible: Narratives of Place and Belonging, will discuss the role of photography in creating, challenging and communicating narratives of place and belonging.

Heidi Morstang (Plymouth University, UK) will deliver the keynote address and screen her short film In Transit. The film investigates an area of Karelia on the Russian/Finish border close to the Arctic Circle. In 1944, approximately 120 Norwegian soldiers serving voluntarily in a German SS unit were killed fighting Soviet forces. The fallen, Norwegian and Soviet alike, were left unburied and without identification until 2005 when locals found remains in the forest under a thin layer of soil.

Ms Morstang will be joined by leading New Zealand-based photographers, writers, historians and graduate students, who will present their work. They include University of Canterbury photography lecturer Tim Veling who will touch on four major projects started in the “unrecognisable city” he calls home. Other speakers include Geoffrey Batchen, David Cook, Natalie Robertson, Anne Shelton and Erika Wolf.

The annual Peter Turner Memorial Lecture is hosted by Massey University, and each year brings to New Zealand an international photographer, theorist or historian, to enrich practice and discourse in the expanded field of contemporary documentary photography. The lecture and associated postgraduate scholarship in documentary photography were established in memory of the late Peter Turner, author, editor, curator and former teacher at the Wellington School of Design. As Massey University Professor Anne Noble notes “both the scholarship and the lecture are a reminder of the Turner legacy and emphasise the importance of photography to critically engaged understandings of the world.”

Co-convenor of these events, Associate Professor Wayne Barrar says “photography continues to help us unpack the complexity of our constantly changing world. Documentary photography itself is also rapidly evolving in response to new technologies and opportunities for engaging audiences in this exchange.”

The lecture and symposium are supported by Massey University’s College of Creative Arts and the University of Plymouth Centre for Land/Water and the Visual Arts.

The text on the image reads:
When I was about six years old, one of the kids at school called me “Ching Chong China man, Born in a jar, christened in a teapot, Ha. Ha. Ha.” I had no idea what he was talking about but I knew from his expression that he was being horrible to me, so I went home to my mother and I said to her, “Mum I’m not Chinese, am I?” My mother said to me very sternly, “yes you are.” Her tone was hard and it shocked me. I knew in this moment being Chinese was like a terrible curse & I could not rely on my mother for help. Or my brother who was four years older than me, very much more experienced in the world, he chimed in, “And you’d better get used to it.”