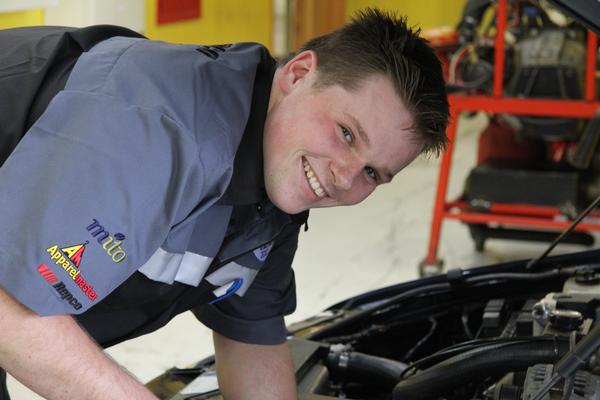 Wanganui apprentice takes out MTA Apprentice of the Year title

Wanganui automotive apprentice Zeb Walker is celebrating success after taking out the 2012 MTA Apprentice of the Year title. Twenty year old Zeb, who works at David Jones Motors Ltd, was one of four finalists competing for the title at a competition held in Wellington on Saturday 8 September.

The finalists, Ben Liddle (Napier), James Dennis (Gore), Jason Brownlee (Greymouth), and Zeb Walker, were greeted by wet, windy and wild weather in Wellington, and their first battle of the day was against the elements just to get to the event.

It was a tough and testing day for Zeb and the other three finalists who had to complete four practical tasks and a panel interview, with only 45 minutes allowed per task. “The tasks were all pretty challenging, but they were all things that we have encountered during our apprenticeship, that we should know how to do,” says Zeb.

The electronic fuel injection task went pretty well for him, but it was the panel interview that was the most challenging. “It was pretty long and quite in-depth, it’s a bit daunting to sit in front of three judges and talk for 45 minutes,” he says.

V8 supercar driver Greg Murphy, called Zeb to announce that he was the winner of the competition and that he would be part of the Greg Murphy Racing (GRM) pit-crew in the V8 Development Series at the Sydney Telstra 500. “He was very stoked to get my call, he sounds like he will be a good addition to the team,” says Greg.

David Jones who nominated Zeb for the award could not speak highly enough of his apprentice, describing Zeb as diligent, and a hard worker who is approachable, friendly and intelligent.

“Zeb has the enthusiasm for our industry coupled with the right attitude and skills to allow him to take his career in any direction, and he will always have the backing of our company,” says David. “The team and I at David Jones Motors are all incredibly proud of Zeb and his achievement.”

Kerryn Foote, MTA HR Advisor and interview panellist, says that Zeb really stood out during the interview. “Zeb is very focussed and self motivated. He showed incredible initiative and prepared himself for every part of the competition. He is very passionate about what he wants to do and I’m sure he will succeed in whatever he sets his mind to.”

Zeb plans to do his ATech qualification next year, and in the future he’d like to own his own business. But for now he wants to learn more about the auto electrical side of the industry and see where it takes him.

As part of his prize Zeb will be a part of the GRM pit-crew in the V8 Development Series at the Sydney Telstra 500 later this year, receive a $3,500 cash prize, a study grant from MITO, a $500 Telecom voucher, a trade tools package from Repco, a gaming console, and much more. There is also a substantial prize package for his employer, and the other finalists.

The long running MTA Apprentice of the Year Award is organised by MTA with assistance from Repco, MITO, Telecom, WelTec, and Apparelmaster, and aims to reward the skills of talented apprentices and employers who are investing in the future of the automotive industry.

For more information about the competition visit www.mta.org.nz/apprenticechallenge.