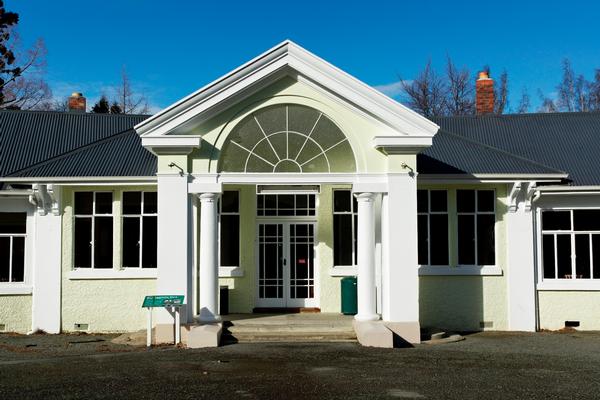 Some of the most historically significant buildings in North Canterbury, at the former Queen Mary Hospital, may soon be redeveloped for uses such as accommodation.

Built in 1916, the Queen Mary Hospital in Hanmer Springs initially operated as a convalescent home for soldiers injured in World War One, utilising the medical benefits believed to be obtained from bathing in the nearby thermal waters.

The hospital later became a treatment centre for those with functional nervous disorders, and later an internationally recognised facility for the treatment of drug and alcohol dependencies up until 2003.

The ownership of 5.1 hectares of the Queen Mary Hospital was passed from the Canterbury District Health Board to the Department of Conservation in 2008, where it was subsequently vested in the Hurunui District Council as an historic and recreational reserve. The 5.1 hectare site contains the hospital’s three oldest buildings and was registered as category one site by the Historic Places Trust in 2005.

The leases for three of the buildings on the 5.1 hectare site and the surrounding reserve have been placed on the market by Bayleys, with development into an accommodation complex as one possibility for its future use.

Mr Van Tongeren said the size and scale of the buildings, the large grounds, and adjacent location to the thermal pools, lent itself to a number of developments which could include  an upmarket accommodation complex similar to Millbrook Resort near Queenstown or Peppers Clearwater Resort on the outskirts of Christchurch.

“The location is second to none, with access from to Hanmer Springs from State Highway 7A and Christchurch just 135kms to the south,” he said.

“The sheer size and scale of the three buildings have created a lot of future opportunities for various business developments. In our view, this is the most significant public and commercial property opportunity of any scale in North Canterbury,” Mr Van Tongeren said.

The oldest of the three buildings for lease, known as the Soldier’s Block, was built in 1916 for injured soldiers returning from World War One. With a total floor space of 1850 square metres, the Soldier’s Block is the only double-octagonal shaped ward still standing in New Zealand and is celebrated as a building of national significance.

Mr Van Tongeren said the unique shape of the building could also lend itself for use as a museum or gallery, but possibilities could also include offices, a restaurant, conference facilities or use by a community group.

Built in 1926, The Chisholm Ward was named after Dr Percy Chisholm, the first superintendent at Queen Mary, and operated as a women’s-only hospital block.

Potential uses for the ward include redevelopment as a hotel, motel, a European health spa, gallery or for use as an educational facility, Mr Van Tongeren said.

The two-level nurse’s hostel was built in 1956 as a residential hostel for the medical team and nurses working on site. The 1850 square building comprises eight self-contained flats and 40 single rooms, a nurses lounge and sitting rooms and a lecture room.

“The design and layout of the building lends itself for potential use as a boutique hotel, motel, backpacker accommodation, or as private apartments, either combined with, or separate, from the Chisholm Ward,” Mr Van Tongeren said.

“Alternatively, the building could also suit someone looking to develop an artist’s quarters, offices, conference or educational facilities.”

Hurunui District Council amenities and special projects manager Bruce Yates said any development of the Queen Mary Hospital buildings or grounds would need to comply with the stipulations in the Queen Mary Historic Reserve Management Plan 2011, which promotes use of the reserve for the community and business purposes in ways that are consistent with the values of ‘wellness’ in its widest context.

According to the plan, ‘wellness’ is defined as “the well-established holistic concept of integrated and balanced human existence comprising several core dimensions including physical, emotional, spiritual, social and environmental.”

Mr Yates said the plan had been written in a way in which the council would be able to consider a wide range of different activities.

“Any activity on the site would need to comply with the conditions set out in the reserve management plan, but we would welcome the thoughts of anyone wishing to develop the site,” he said.