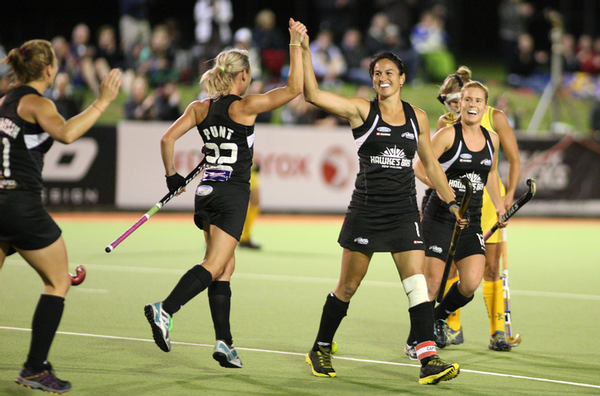 Black Sticks in Hawke's Bay to thank community for their support

Six of the Black Sticks players will be in Hastings tomorrow (Tuesday 18th September) to thank the Hawke’s Bay community for supporting the teams during their Olympic campaigns.

Captains Kayla Sharland, Emily Naylor and Dean Couzins as well as Kyle Pontifex, Katie Glynn and Bianca Russell will share their Olympic experiences with business and community leaders who supported them on their journey to the Olympics.

Twelve months ago, Bruce and Robyn Mactaggart along with Hastings businesswoman, Jenni Giblin and Hastings Mayor Lawrence Yule assembled a group which included some of the regions’ most influential and forward thinking residents.

“It has been a very special sponsorship. These leaders have really rallied the support of the whole community and engaged with us as players,” says co-captain Kayla Sharland.

“We were getting lots of messages from Hawke’s Bay people while we were in London – and that really helps when you are preparing to take on the best teams in the world,” says Sharland.

The sponsorship package allowed both teams to come to Hawke’s Bay for an Olympic induction weekend and a separate training camp. The support also helped the teams get the extra international competition they needed during their build-up to the Olympics.

Lawrence Yule says “This was a unique package and Hockey New Zealand must be congratulated for having the courage to take on the sponsorship. The 24 Hawke’s Bay businesses that supported this initiative should also be recognised for their foresight in providing the opportunity for the region to be promoted to a worldwide audience. All these businesses can be very proud of their support for the Black Sticks.”
Mr Yule says “Hockey has come away from the Olympics with a very high profile and we look forward to further gains in player numbers and the achievements of the international teams in the years to come. Hawke’s Bay is extremely proud of the efforts of the players in both teams.”

As part of the Black Sticks visit tomorrow, they will meet the Hawke’s Bay Under 13 Girls Representative Team to share their experience of life in the Olympic village.

The Black Sticks players will meet the sponsors on Tuesday 18th September from 4.30-5pm at Vidal Estate in St Aubyn Street, Hastings and media are invited to attend. The players will be available for interviews during this time.