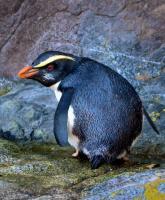 Some of the world’s rarest penguins are putting on a show for visitors to New Zealand’s Milford Sound.

Visitors on board Southern Discoveries’ Encounter Nature Cruises have had regular sightings of Fiordland crested penguin or tawaki over the past two weeks as they cruise through the iconic sound - part of the Fiordland National Park and a UNESCO world heritage site on the south-western coast of the South Island.

"There’s more penguins this year than we saw last year, which is really positive for the colony and great for our guests as there are only up to 3000 breeding pairs in existence," Newman said.
Penguin Cove

Penguins belonging to 13 of the world’s 18 penguin species visit New Zealand shores, but only three species breed on the mainland.

"There’s a real buzz when we first start seeing the penguins. They’re a very special bird as they’re so rare, we’re so lucky to be able to see them. They come ashore and work their way into the thick rainforest, building nests in natural cases or hollowed out trees and forming colonies of up to 10 pairs," Newman said.

"We’ll expect to see the penguins here until November when their chicks are ready to head out to sea."

Visitors will have a good chance of viewing the ongoing ‘wildlife show’ over the coming months as the Encounter Nature Cruise route passes close to the Penguin Cove colony on its voyage out to the entrance of Milford Sound.

The penguins make their homes in the aptly named cove during the July to November breeding season, and again between January and March for moulting.

Newman said penguins seen from the cruises in Milford Sound were often on the exposed rocky shorelines inside the fiord or sometimes spotted on calm days swimming around on the surface of the water in small groups.

"It’s an amazing sight either way that even locals get excited about," he said.

Dolphins and a whale

A rare southern right whale spent a day patrolling Milford Sound’s waters last month providing an unexpected photo call for visitors - appearing first near the wharf, then surfacing several times close to the nature cruise boat as it cruised in the sound.

It was rare to see a whale inside the fiord and two years since a southern right was lost spotted at the entrance to Milford Sound, Newman said.

Cruises were also reporting plenty of bottlenose dolphins around the boats at the moment.

"They love to play around the bows of our catamarans as well as our Encounter Nature Cruise boat, the Lady Bowen, or swim behind or beside the boats," Newman said.

"It’s quite possibly one of the most joyous sights for visitors, many of whom have never seen a dolphin in real life, and they never cease to amaze us locals. The periodic visits by dolphins can be the highlight of anybody’s day.

"For keen photographers, a good photo of a dolphin launching itself out of the water - and there’s some serious luck involved here - is like getting a special trophy!"

Along with showing off local wildlife, the nature cruises help educate visitors about awareness and respect of the environment and wildlife which is key to ensuring that the Fiordland crested penguin population and others survived in New Zealand, Newman said.

Southern Discoveries encourages "gentle viewing" of any wildlife encountered on its cruises. Using a smaller cruise boat they are able to get close to penguins and other wildlife without disturbing them, as well as cruising close to the rock faces of the fiord to view flora and fauna.

There are also kayaking trips into Harrisons Cove for a closer, more intimate experience of wildlife at water level.

"We see penguins and dolphins in this cove all the time and from your kayak you can see straight through the crystal clear water, even spotting starfish lying beneath you."

Southern Discoveries is an active supporter of wildlife and conservation programmes, and a key partner in the Sinbad Sanctuary conservation project - an award-winning conservation drive to grow the endangered Fiordland skink population.

Rudyard Kipling described Milford Sound as the "eighth wonder of the world". More recently, it was named ‘#1 Destination in the World’ by TripAdvisor, the world’s largest travel community.

Located within Fiordland National Park, in the South Island, the 'sound' is actually a fjord running 15km inland from the Tasman Sea, and surrounded by sheer rock faces rising to 1200m or more on either side.

Milford’s majestic landscape features include Mitre Peak (1,692m), the Elephant (1,517m) resembling an elephant’s head, and Lion Mountain (1,302m) shaped like a crouching lion. Lush rain forests cling precariously to these cliffs, and the deep waters are populated by seals, penguins and dolphins.
Milford Sound’s high annual rainfall and distinctive narrow shape creates a fresh water layer on top of the seawater, allowing deep-water dwelling species to exist at a much shallower depth. Milford Sound Underwater Observatory and guided dive tours give visitors a glimpse of rare species such as red and black coral.

Scenic cruises and kayak tours explore the fiords and wildlife in its natural habitat.