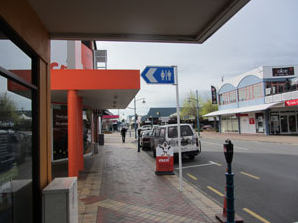 The newest public toilet amenities in the CBD are clearly signposted from High Street; they’re less than a block from the town centre, a few steps from the end of Queen Street.

Like all the public toilets within the CBD, these smart new facilities are serviced by cleaners three times a day.

Members of the public are urged to contact the Council if they find any facility in an unhygienic state; Ph: 03 520 7400 seven days a week.

Older public amenities are notorious for attracting vandals but the new facilities in Picton and Pollard Park have not been subject to the same level of vandalism as the previous old blocks, and the new amenities, off High Street, are also attracting less undesirable behaviour.

It’s hoped the design of the new toilets being built at Liz Davidson Place in Queen Street will also discourage the problems that occurred in the old block, which has now been demolished.