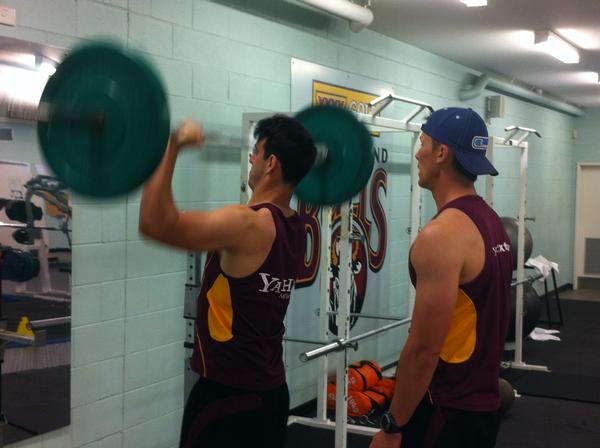 Benefits aplenty for ND training with the Queensland Bulls at their Brisbane HQ CREDIT: NDCA

Northern Knights To Hook Up With Queensland Bulls

There must be something magic about maroon and gold because it's tops on both sides of the Tasman. Just as the Northern Knights are the Plunket Shield defenders here in New Zealand, the Queensland Bulls are the reigning Aussie four-day champs.

That's meant a meeting of the minds over the past fortnight with six of our Knights - Anton Devcich, Joey Yovich, Brad Wilson, James Baker, Daryl Mitchell and Corey Anderson - embedded in the Bulls' training headquarters in Brisbane. And just look at that excellent colour coordination going on!

Coaches Grant Bradburn and Craig Ross shot over as well to continue an innovative relationship between Queensland Cricket and Northern Districts Cricket that's been fostered over the past four years. Until now it's been limited to coaching exchanges and the like, with this season being the first time that our ND players have been able to go over to train and see for themselves how their Australian counterparts do things.

It's gone so well that Grant Bradburn has some really exciting news to report: the Queensland Bulls are keen to host the whole Knights squad over there in future, and to set up a 'Battle of the Tasman' - annual preseason fixtures that would become a highlight of the Northern Knights' annual spring camp programme.

"Queensland Cricket has become a sister association for us and our guys are in training heaven over there at the moment with 28 degree heat and brilliant facilities, including an open wicket, full gym and recovery room with hot-and-colds," Grant says. "It's just awesome, but more importantly Craig and I are really proud of the way our guys have been footing it with the Bulls and the way they've fitted in.

"When we got over there, which was later in the first week, all of the guys involved in Queensland Cricket couldn't speak highly enough of our players and (Bulls coach) Darren Lehmann has taken a shine to Jimmy Baker, who's had a slight ankle injury over the last month but did great physically in spite of it.

"Corey has done great too, and it's fantastic to see our younger players standing against the big Queensland guys."

Lehmann's down-to-earth and much respected style places an emphasis on talking to players and putting cricket skills and excellence first, rather than relying too much on sports science and trying to create super-athletes, and the players have found him relaxed, accommodating and straight-up, Grant says.

"He told them straight, 'Don't be late or you'll be sent home'! They had a lot of specific batting and fast bowling work last week and they've shown the kind of commitment we expect. And from my own point of view I'm really welcoming of the guys being exposed to different viewpoints. It's very cool and of course just so much better for our guys than training on artificial surfaces."

Queensland have their opening Sheffield Shield match next week so, needless to say, the training has been at full steam, with some tough sessions. Here's a glimpse into what the guys have been up to:

ND's group of six come back this Sunday, with Daryl Mitchell having flown to Brisbane direct from his offseason in Perth, stopping off en route before returning to his "second home" in the Tron.

Other players like Jono Boult and Mitchell Santner are newly back from their winter playing abroad. Mitchell was the star for Holmfirth in Yorkshire's Huddersfield league where he became the first player to score 500 runs in the season's league championship and conference with scores of 94, an unbeaten 111 and 80, as well as taking 37 wickets.

Pretty soon everyone will be back together for the first of the spring camps back here in ND territory and we'll have more reports for you then as we take you inside the team's prep activities for the first time.